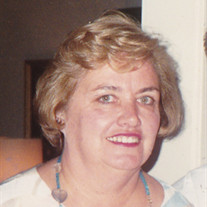 Our mother began her life in Bartholomew Children's Hospital in Columbus, Indiana on September 20th, 1932. She spent the first four months of her life in the children's ward of the hospital being taken care of by a host of nurses while she waited for that special family to adopt her.

Albert Klingeman became quite taken with her on a visit to the hospital and began visiting her on a regular basis. He had been dating the head nurse from the hospital but our mother was the impetus he needed to ask her to marry him. Nellie and Albert married and became the loving couple that adopted our mother and gave her the name of Elizabeth "Betsy" Klingeman. They moved to Cleveland and later to Shaker Heights, Ohio.

As a little girl, our grandparents would enter our mother into photo contests which she often won because she was such a photogenic child. As she became older she was most uncomfortable with the attention and so they stopped entering her in the contests, though she remained photogenic all throughout her life. Mom went to Laurel School and was considered kind, fun-loving and a bit mischievous by everyone who knew her.

During her senior year at Laurel a friend set her up on a blind date with our father Glenn Darling. Dad was in college at Duke University and when mom graduated Laurel she went to Bradford College in Massachusetts. Dad would make the long distance drive from North Carolina to Massachusetts to visit her often and in 1952 they were married in the Duke Chapel and set up housekeeping in a small apartment off the Duke campus in Durham, NC.

When dad graduated, he and mom moved back to Cleveland and shortly after their first child Deborah was born. Their second child Kimberly came along eighteen months later and their youngest Kelly arrived seven years after Kim. At the time of Kelly's birth we were all living in Shaker Heights but shortly after she was born we moved into a beautiful house in Pepper Pike that dad had built just for us. Throughout the years, our parents hosted many parties and people loved to attend because they were such gracious hosts. Mom in particular put everyone immediately at ease. Even complete strangers, within minutes of meeting her, felt they had known her for years.

Mom was a wonderful, loving mother and always had a childlike inquisitive spirit that made life so much fun for her friends and family. You never knew what she was going to do. She loved music and instilled her love of music in her children by making sure we were introduced to everything from Opera, to Broadway Theater to Concerts. She loved to garden and could put together the most amazing floral bouquets. When she was not working in her own garden she was volunteering at University Hospital in the Flower Shop helping to make patients a bit happier with the wonderful floral arrangements she would make.

She was an avid reader and could answer every "Cash Cab" and "Jeopardy" question known to man. Mom and dad were divorced and in 1971 she married Robert "Bob" Heighberger. While she was married to Bob she bought a well-known children's store called Helen Hale at Shaker Square and expanded it to two locations. It turns out she was a wonderful business woman as well as wife and mother. Bob had always wanted to own a farm so they sold the store and the Pepper Pike home and bought an 80 acre farm in Ashland, Ohio.

Mom loved the farm and enjoyed hosting family gatherings there. The neighborhood children just loved her and though she was a city girl the folks from the country adored her as well. Everyone said how "genuine" she was and she was that. What you saw was what you got with our mother. She wouldn't know how to put on airs if she tried. She was "the real deal". She lived on the farm until Bob's death. The farm was lovely but very far away from everyone. We kids were concerned that it would take us too long to get to her if she needed help. So we insisted that she move closer to one of us. She opted to move to Aurora, where she immediately struck up great friendships with her new neighbors.

She loved Aurora and her great next door neighbors whom she became very close to. But her health started to decline. First she had a stroke, then heart disease and had to have a pacemaker-defibrillator put in and then cancer. She left her Aurora home in 2007 and moved in with her oldest daughter Debbie. She was such an easy going person and never complained about anything. She was a wonderful mother, best friend and great living companion. She had the best sense of humor no matter what the circumstances. Her life was far from easy. She went through a lot of hard times but always managed to see the bright side of life.

Two years ago she fell and broke her shoulder and while she recuperated from this accident, there were changes in other ways and she rarely left the house. She was so excited to be able to make it to Christmas Eve 2014 at her daughter Kelly and son in law Mark's house and commented that she had been so afraid she would never get to see Kelly and Mark's house again and was so happy she saw it one last time. Her health gradually declined but not so much so that her passing was expected. We all just thought she was slowing down a bit but on August 18th she died peacefully in her sleep at her daughter's home, exactly as she had wished.

Mom was an amazing artist and great poet. She was so quick witted and just plain fun to be around. She will be greatly missed.

A bright light was extinguished on August 18th but there is another great luminary lighting up the evening sky with her name on it. We love you and miss you beyond words mom and know that you will be with us always in our hearts. Until we meet again. Nous t'aimerons pour toujours!

The family prefers that those who wish make contributions in her name to Laurel School, 1 Lyman Circle, Shaker Hts., OH 44122.


PDF Printable Version
To order memorial trees or send flowers to the family in memory of Elizabeth Heighberger, please visit our flower store.