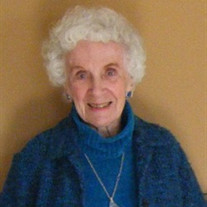 Elizabeth "Betty" Norton Greve was born on December 24th, 1916. She always remembered Santa placing her under the Christmas tree, just so, to be found by her family in the morning. Betty was the daughter of Clifford and Irene (Dearie) Norton, and the sister of Jane Norton Rampe (husband John F. Rampe) and Donald Norton (wife Carol).

Born in Cleveland, Ohio, Betty spent her childhood growing up in Cleveland Heights and Russell Township. A keen observer as a young person, Betty immersed herself in her writing, winning contests and prizes as early as high school. She pursued her creative interests into college, attending Flora Stone Mather College for Women in Cleveland. She graduated in 1939 with a BA in English and went on to teach in the Cleveland area for a few years. When her brother, Don, enlisted with the Army Air Corps, as a Lt. Colonel and bombardier on the B24 "Touch of Texas," Betty took his place with their father at the family photography studio, Clifford Norton Studio.

This started a 50 year career as a professional photographer at one of the premier photography studios in Cleveland. Betty was sought-after as a photographer for her verve and charm and enthusiasm. In 1984, Betty, a wedding photographer, married Ralph Greve, a wedding florist and the proprietor of Greve's Flowers in Cleveland Heights. They spent the next two decades traveling the world together and spending time with family until Ralph's death in 2002.

Donations may also be made to Hospice of the Western Reserve, for their unparalleled end-of-life care at 300 E. 185th St., Cleveland, OH 44119.


PDF Printable Version
To order memorial trees or send flowers to the family in memory of Elizabeth Greve, please visit our flower store.