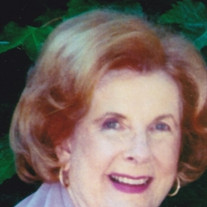 Betsy had her first job in 1944 while still in high school as a model for Franklin Simons Department Store. She sang in many high school productions and joined her sisters Marion and Barbara singing at school social events. In her senior year, Betsy received an offer to sing professionally with big bands in New York, an opportunity she did not pursue. In 1945, she graduated from Shaker Heights High School and went on to Colby Junior College in New Hampshire where she studied voice.

After college she worked at Ohio Bell Telephone and spent six years as an executive secretary for Robert Heller and Associates before marrying William Griffiths and starting a family.

In 1959 she joined Trevor Guy's Dixieland band and became known for the next forty years as the "Doll" in "Trevor Guy's Guys and Doll." They recorded three record albums over the next twenty years and performed throughout the Cleveland area at every type of social gathering imaginable.

In 1969 Betsy and Trevor were married and combined their two families of Betsy's three daughters and Trevor's two sons in Cleveland Heights. She was the director of entertainment for the local Marriott Inns for fourteen years, an experience that resulted in the formation of her own entertainment booking agency.

Over the years she was also involved in many theatrical productions at the Hermit Club and with the traveling group known as "Nelson's Follies." In 1989 she moved to Naples, Florida, with Trevor Guy where they continued performing at jazz clubs in the Naples area. During the summer months they would return to Cleveland to perform at various venues and spend time with family. After Trevor's death in 1998, Betsy joined a swing ensemble called the TOPS Band, which consisted of retired musicians from Northeastern Ohio. Betsy continued to sing until a month before her death, occasionally sitting in with the Highlighters when they performed at her retirement home in Aurora.

Betsy was a vivacious, statuesque woman whose smile would light up a room as soon as she entered. She loved to entertain and hosted the annual Mardi Gras party at her condominium in Naples.

She was an active member at the Cleveland Skating Club where she played tennis and served on the Board of Trustees from 1984-86.  She was the second female to serve as a board member.

She was a devoted wife and mother and she loved her family dearly. She enjoyed spending time with her grandchildren and will be greatly missed.

The family prefers that those who wish may make donations in the name of Betsy Guy to: The Cleveland Playhouse Square - Education Programs, Attn: Michelle Stewart, 1501 Euclid Ave. Cleveland, Ohio 44115.