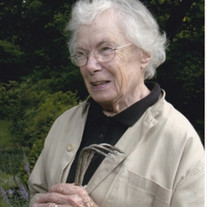 Eleanor Lowe Donley died peacefully after a very short illness surrounded by her family on June 1, 2016 at the age of 97. She was born in Cleveland Hts. on August 21, 1918. She attended Fairfax Elementary, Roxboro Jr. High, and Cleveland Hts. High. She went to Denison University and then the Cleveland Institute of Art.

She was married for 74 years to William McLeish Donley. They were married in January 1942. She will be greatly missed by her husband, her daughters Marcia Donley of Fayetteville, AR and Nancy Donley (Jim Newman) of Cleveland Hts., OH, her cat Webster, and her many devoted friends whose lives she enriched immeasurably.

She was a Girl Scout troop leader for 12 years and much loved by her troop, who still get together. Ellie enjoyed textile design and was president of the Textile Arts Club at the Cleveland Museum of Art. She loved gardening, tending several large beautiful gardens around her home. In 1970 she joined the Western Reserve Herb Society, serving as a weekly volunteer, garden chairman and finally, unit chairman. She illustrated several of their cookbooks and the Northeast Ohio Perennial Society's book. She also designed gardens, including the Ronald McDonald garden and gardens for the Cleveland Botanical Garden Shows. She was an active member of the Fairmount Garden Club since 1983 and also the National Herb Society where she received several awards. Ellie will live on in the hearts and lives of the many people she affected.

The family prefers that those who wish make contributions in her name to Western Reserve Herb Society or to the Cleveland Botanical Garden, both may be mailed to 11030 E. Blvd., Cleveland, OH 44106. A Memorial Service will be held on Thursday, July 7th at 4:00 PM at St. Paul's Episcopal Church, 2747 Fairmount Blvd., Cleveland Hts., OH 44106.