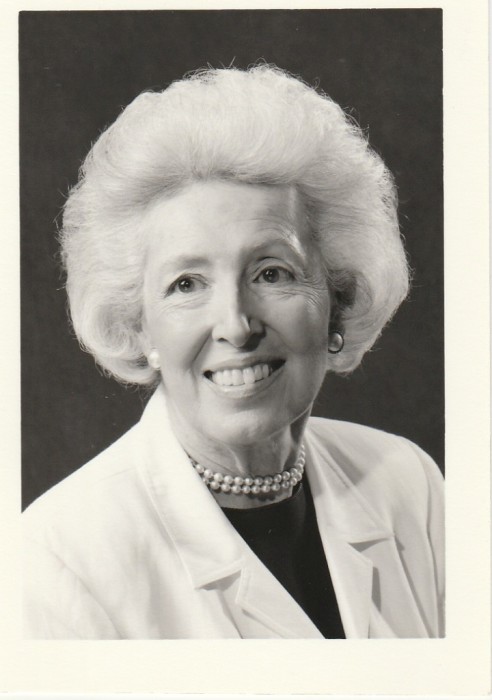 
By Grant Segall, The Plain Dealer

Hadden attended the Cleveland Orchestra on Sept. 19 and died the next day at University Hospitals. She was 88.

A slim woman with a regal crown of hair, Hadden was best known for leading the drive that turned a clutch of decrepit 1920s theaters into Playhouse Square, the nation’s biggest complex of stages outside New York.

Bill Hilyard, a retired Playhouse Square development officer, recalls an example of her persuasiveness for that cause. She once told her fellow Junior Leaguers, “Ladies, we sleep with some of the most powerful men in Cleveland: our husbands! Get them to pull out their checkbooks!”

Hadden led several boards and served on several others. She was believed to be the first woman on the board of a major local bank, doing so with Union Commerce.

She stumped for Planned Parenthood. At age 78, she took to the streets to protest the sale of vintage cars by the Crawford Auto-Aviation Museum.

Gina Vernaci, Hilyard’s wife and Playhouse Square’s president and chief executive, said, “She had the vocabulary to paint a picture better than any artist. She was funny. She was on point. She was a force to be reckoned with.”

Elaine Grasselli was born into the Grasselli Chemical family. She was raised in Bratenahl and Miami Beach.

She attended Laurel School and Virginia’s Madeira School. Years later, she served on the boards of both. In between, she became student president of Vassar College and graduated from there.

Back in Ohio, she married John Hadden, whose prominent relations included John and Elisabeth Severance. In 1957, the couple moved their growing family to a bigger house in Cleveland Heights. Lainie lived there the rest of her life.

In 1972, as president of the Junior League, she raised $25,000 to help a driven Ray Shepardson save the Euclid Avenue theaters from the wrecking ball. She also deployed an army of women and children to scrape scrub and restore the theaters. She once called them “the Augean stables of Cleveland,” alluding to squalid sites of myth.

In 1973, Joseph Garry Jr. staged the revue “Jacques Brel Is Alive and Well and Living in Paris” in the State Theatre’s deteriorated lobby at Shepardson’s urging. Dry ice served as the only air conditioning.

The show was supposed to run 2 ½ weeks. It lasted 2 ½ years. Hadden attended more than 300 times, often bringing guests and recruiting them to the cause.

“There was no one more important than Lainie in saving Playhouse Square,” Garry said today. “Her grace and charm and support and elan gave us all the courage to go on.”

Years later, Hadden told a Playhouse Square interviewer, “It was important to do something that might bring this part of the city back to strength and excitement and engagement.”

In a 2012 ceremony at Playhouse Square, quoting the song “Over the Rainbow,” Hadden said, “Dreams that you dare to dream really do come true.”

Today, with its Lumen apartments on the rise, Playhouse Square is still growing as a hub of culture and commerce.

Hadden seemed to know everyone in town and remember their life stories. She and her husband threw many parties with an eclectic mix of guests.

She also staged countless benefits. In 1977, she teamed up with Rudolph Garfield to write and record a narration for a benefit screening of “Perils of Society,” a 1916 silent movie by local bluebloods.

“That little film shows you the kind of frivolous world that people lived in,” she told The Plain Dealer. As for the narration, “We knew it had to be sort of campy, so we camped it up.”

From 1974 to 2003, Hadden was a trustee of Case Western Reserve University. In 1999, she raised $7.2 million in six weeks to name a new science center for retiring President Agnar Pytte. She also funded a professorship and yearly author talks.

On Wednesday, in a Case Western blog called “the daily,” President Barbara Snyder said of Hadden, “She loved people, she loved ideas, and she loved sharing her enthusiasm with others.”

Hadden won the school’s highest honor, the University Medal. She won the President’s Medal from Cleveland State University, where she raised money for scholarships.

She won the Jewish Federation of Cleveland’s Charles Eisenman Award for civic betterment. The Hanna Perkins Center named an award for her.

Hadden gave in big ways and small. A friend a block away once cancelled lunch plans with her because of a cold. Soon the friend found a bag on her doorknob with a get-well-card, echinacea, cough medicine and more.

In 2011, Hadden told Cleveland Magazine, “I’ve been too busy living my life to consider my legacy.”

The widow’s survivors include two daughters, two grandsons and her companion, David Ford. Brown-Forward Funeral Home is handling her arrangements.

Some 10 years ago, aware of her people skills, The Plain Dealer encouraged Hadden to suggest worthy candidates for news obituaries. As in so many other causes, she proved persuasive.

To order memorial trees or send flowers to the family in memory of Elaine " Lainie" Hadden, please visit our flower store.