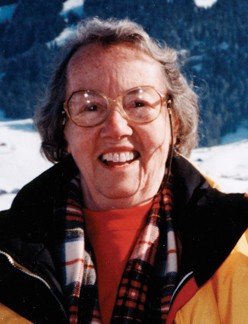 Edyth Hull Schoenrich passed away peacefully at her home in Baltimore, Maryland on September 12 at the age of 101 with her loving family by her side. She was predeceased by her husband of 60 years, Carlos Schoenrich, and siblings Marion Donohue and Edwin John Hull, Jr.  She is survived by her children Lola (Peter Oppenheim) and Olaf Schoenrich (Marilyn Macy), and numerous nieces and nephews.

She was born in Cleveland on September 9, 1919, the first child of Edwin John Hull and Maud Mabel (Kelly) Hull. She grew up in the “Fairmont House”, a multi-generational home with beloved grandparents, parents, aunt, and her sister and brother. She and her siblings happily roamed Shaker Heights with the cousins who lived in the house just behind them.

Dr. Schoenrich always said that her interest in medicine began "in sixth grade, when our natural science teacher... inspired our class about the wonders of the life process: sprouting seeds, tadpoles turning into frogs, and other wonders. At that age I developed an irresistible...desire to understand the life process. I fixed upon the prospect that the medical profession would answer all my questions.” She earned a BA from Duke University in 1941 and met Carlos there during post-graduate work in psychology. They married in 1942 during World War II and, after Carlos was deployed to the South Pacific, Edyth decided that, rather than sit at home worrying, she would follow her dream of becoming a doctor.

She graduated from the University of Chicago Medical School in 1947, one of three women in her class of 75. She completed an internal medicine internship and residency at the Johns Hopkins Hospital from 1948 to 1952, serving as chief resident in her final year.

Dr. Schoenrich was a pioneer in preventive medicine and was known for her work at the local and state levels to improve the quality and accessibility of care for the poorest and sickest chronic disease patients. In her seventy-plus years with Johns Hopkins University, she held faculty and leadership positions in both the Johns Hopkins School of Medicine and the Bloomberg School of Public Health. She was passionate about her work at the school, saying “some of my greatest gratification is … assisting graduate students in the field of public health. My generation and the immediate generation following me are passing. The younger men and women are the future, and the responsibility for the health and welfare of the communities in which they live and work will rest with them.” She continued to inspire students even after her formal retirement at the age of 97.

Dr. Schoenrich joined the Department of Medicine at Johns Hopkins School of Medicine in 1953. After she began working in outpatient clinics, she realized that the hospitalized patients she had been treating “had had their disease processes creeping up on them for years before I saw them in crisis, and they were going to live with the consequences of these disease processes for the rest of their lives, whether they were going to live two more days or another 20 years.”

On the staff of Baltimore City Hospital, she became one of the earliest advocates of comprehensive care for severely ill patients with long hospitalizations. In 1964, while working in the Maryland State Department of Health and Mental Hygiene, where from 1971 to 1974 she served as the first director of the Maryland Administration for Services to the Chronically Ill and Aging, she began teaching at the Johns Hopkins Bloomberg School of Public Health. From 1969 to 1971, she was one of the School’s first part-time MPH students, riding the bus to classes from her downtown office and logging nights and holidays to maintain her full-time position as director of Maryland’s Bureau of Chronic Diseases. In 1974, she was named a full professor in what is now the School of Public Health’s Department of Health Policy and Management, where she directed the Division of Public Health Administration.

Dean D.A. Henderson named Dr. Schoenrich associate dean for Academic Affairs in 1977, the first female associate dean at Johns Hopkins University. Over their nine-year partnership, she modernized the School’s educational programs, increased students’ clinical and practice experience, and spearheaded the transformation of the General Preventive Medicine Residency. She capped her remarkable career by directing the part-time professional programs and serving as deputy chair of the MPH Program from 1986 until 2018. Drawing on her personal experience, she helped design flexible graduate programs for working professionals.

An elected fellow of the American College of Physicians and the American College of Preventive Medicine, Dr. Schoenrich was inducted into the Maryland Women's Hall of Fame in 2005 and also held leadership roles in the American Public Health Association, American Hospital Association, and at MedChi, the Maryland State Medical Society. Her numerous honors from Johns Hopkins include the Ernest Lyman Stebbins Medal and the Golden Apple teaching award. The Bloomberg School established the Edyth Schoenrich Professorship in Preventive Medicine and the Edyth Schoenrich Scholarship to honor her work and legacy.

Dr. Schoenrich was a life-long gardener, loved hot-air ballooning over the Loire Valley and the Swiss Alps and was an avid opera buff.

There will be a private family service and a future public virtual memorial. Please check back for the memorial information.

There is an obituary in the Baltimore Sun which may be reached through the following link:

To order memorial trees or send flowers to the family in memory of Edyth Hull Schoenrich, MD, please visit our flower store.