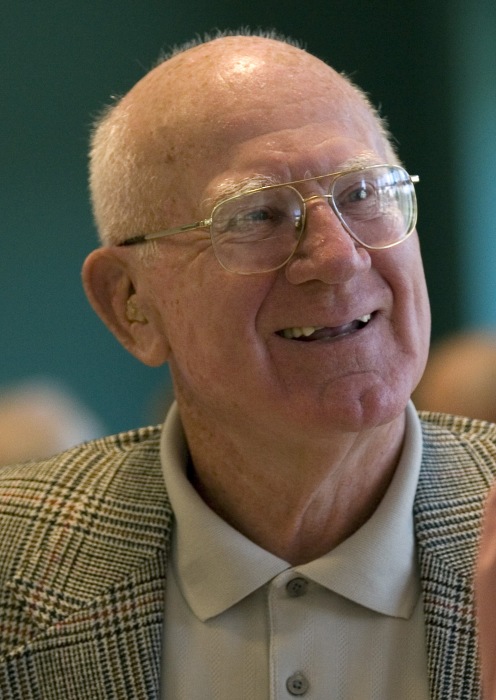 Born in West New York, NJ in 1929, to Leona and Edward P. Markey, Sr., Eddie was the oldest of four children in a working class family, raised in the shadow of a copper foundry. Along with his siblings, he was a standout athlete for St. Joseph’s of the Palisades HS. After graduating in 1947, he took a train to Burlington, Vermont to attend St. Michael’s College on a basketball scholarship. Arriving in September to freezing temperatures, he nearly turned back from the place that became his home.  He excelled in both baseball and basketball, captaining and leading both sports to state championships.

After graduation, he was drafted into the U.S. Army and spent his tour of duty during the Korean War at Fort Dix, NJ, coaching baseball leading his team to the 1954 Army base championship.  After his discharge, he returned to St. Michael’s in 1954, where he earned a master’s degree in History and coached baseball and basketball under the mentorship of his coach George “Doc” Jacobs. He settled in South Burlington, marrying Carol in 1958 and raising his children Ed and Kathryn on and around the campus.

In his illustrious coaching career, he led the Purple Knights to two New England Division II Championships, and in 1965, to the National Final Four. He was named Vermont Coach of the Year in 1964, 1965, and 1967, and was UPI's Division II Coach of the Year in 1965 and 1967. Ed also coached the SMC baseball team for 19 years.  An NCAA cornerstone in New England, he was President of the New England College Athletic Conference, Chairman of the NCAA Division II Basketball Selection Committee, member of the ECAC Executive Council, recipient of the Alvin “Doggie” Julian Award for exemplary service, and is enshrined in multiple halls of fame. He has more years of service to the department of athletics than anyone in college history.

Always an athlete, Ed could be found running laps in the gym every day before basketball practice.  Eventually, he took the practice outdoors where he ran for more than 1,000 consecutive days, including completion of the Green Mountain Marathon in 1982. He later became an avid golfer, enjoying time on the Marble Island and Burlington Country Club courses.

After retiring in 1997, he and Carol left the cold Vermont winters and spent more than 20 years in Florida. Ed and Carol made the most of their retirement, regularly enjoying the ocean, visits from friends and family and many days on the golf course at the Cocoa Beach Country Club. The Markeys were loyal parishioners at St. John Vianney in South Burlington, Our Savior parish in Cape Canaveral and St. Dominic in Shaker Heights, OH, the latter after moving to Beachwood in 2016. During their years there, Ed and Carol they were cared for by the loving and generous aides of the Beachwood Commons community and The Hospice of the Western Reserve.

In lieu of flowers, memorial contributions may be made to the Ed Markey ’51 Athletics Fund at Saint Michael's College, One Winooski Park, Box 256, Colchester, VT 05439  or online at www.smcvt.edu/markeyfund

A Funeral Service for both Ed and Carol will be held at the Chapel of Saint Michael the Archangel on the campus of Saint Michael’s College, 810 Campus Rd., Colchester, VT 05439 on Monday, November 11 at 10:30 am.  FRIENDS MAY CALL AT READY FUNERAL HOME, 261 SHELBURNE ROAD, ROUTE 7, BURLINGTON, VT 05401 ON SUNDAY, NOVEMBER 10 FROM 1-3PM AND 5-7PM.  Private family interment, Resurrection Park Cemetery, So. Burlington, VT.

To order memorial trees or send flowers to the family in memory of Edward Markey, please visit our flower store.