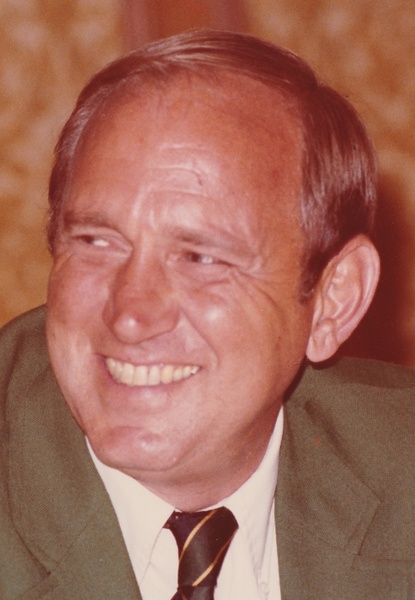 Ed was born on September 15, 1931, in Davenport, Iowa, where he enjoyed a happy Midwestern childhood on the banks of the Mississippi River, playing baseball with his friends and romping with Betty and his beloved Saint Bernard, Brandy.  He graduated from Culver Military Academy in Indiana and later Northwestern University, where he met Phyllis, his one true love.  He then served in the Navy, sailing on the destroyer U.S.S. Colahan in the western Pacific Ocean during the Korean War and rising to the rank of lieutenant.  After the Navy, Ed, now married to Phyllis, attended The Wharton School of the University of Pennsylvania, graduating near the top of his class.  Ed then launched his nearly four-decade banking career at National City Bank in Cleveland, Ohio, as a management trainee.  He rose steadily through the ranks of the bank’s corporate and consumer banking groups, eventually serving as chairman and chief executive officer of National City Corporation.

Ed lived a full and rich life outside the business world as well.  A natural athlete, Ed was a boxer and baseball player at Culver; intramural baseball player at Northwestern; and an avid golfer well into his late eighties.  Ed counted as one of his fondest memories the summer he played on the same softball team with his two oldest sons in the recreation league of Shaker Heights, where Ed and Phyllis lived for 40 years while they raised their family.  He rarely missed a school or rec-league game of his children and grandchildren.  Ed and Phyllis both loved being on the water, at first pulling water skiers on Lake Erie and later taking their boat to tour the Intracoastal Waterway near their treasured waterfront home on Amelia Island in Florida.

Ed devoted much time and energy to the community, serving on numerous civic boards – like those of St. Vincent’s Hospital, Notre Dame College, YMCA, and United Way.  He was a valued member of Church of the Saviour in Cleveland Heights.  He was an enthusiastic stamp collector, poker and bridge player, spy-novel reader, and genealogy researcher.  And he and Phyllis shared a love of travel, embarking on trips around the world. Highlights included meeting newly discovered family in Germany, cruising down the Nile River, and repeated stays in Paris, Italy, and Greece.  Up until his last days, Ed welcomed visits from the many canine members of his family, who happily lounged at his feet.

Ed was well known for his authenticity, sharp sense of humor, and sincere humility -- with an uncanny ability to recall names, including those of hundreds of National City employees.  But most of all, Ed will be remembered for his great warmth and boundless generosity -- deeply loved by his large family and cherished by his many friends, neighbors, and colleagues.

A service for the family only will be held in The Wade Memorial Chapel of Lake View Cemetery, but will be live streamed for the public and can be viewed Friday, December 24th, 2021 at 11am via the link on this web page.