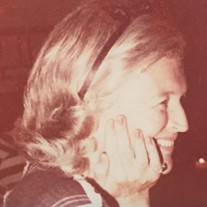 Her life was an exclamation mark. From her school days at Hathaway Brown where she was elected to May Queen to her days studying drama at Skidmore, she had a zest for life and her friends. She spent her summers throughout her life in Christmas Cove, Maine, a farm in Burton, Ohio and the remainder in Sanibel Island when not in her beloved Cleveland. Dottie belonged to the Cleveland Skating Club, the Kirtland Club, the Chagrin Valley Hunt Club, and the 21st Century Club. When out of town she enjoyed the Captiva Yacht Club and the Christmas Cove Improvement Association.

Dottie loved being in the "know" so employment as a writer for the society column at the Cleveland Press was a perfect occupation. A volunteer all of her life, Dottie started as a candy striper for the Junior League and later manned the information desk at the University hospitals.

The family prefers that those who wish may make contributions in her name to Caregivers of Arden Courts of Chagrin Falls, 8100 E. Washington St., Chagrin Falls, OH 44023 or to The Federated Church, 76 Bell St., Chagrin Falls, OH 44022. FRIENDS MAY CALL AT BROWN-FORWARD, 17022 CHAGRIN BLVD., SHAKER HTS., OH 44120 ON FRIDAY, OCTOBER 7TH FROM 4-6 PM. Private graveside service for family.
To order memorial trees or send flowers to the family in memory of Dorothy Rhodes, please visit our flower store.