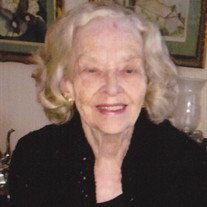 Doris was born on March 19, 1925 to Nettie May Byrom Suits and Leslie D. Suits in Sherburne, NY. She graduated from Onondaga Valley Academy in Syracuse, NY and attended Crouse-Irving Hospital School of Nursing in Syracuse, NY.

Doris and Roger raised their sons and daughter in Rockville, Maryland, and enjoyed gardening, card games, puzzles, camping, canoeing, bird watching, swimming, music, playing the piano and spending time with family and friends. She especially enjoyed vacationing at their cabin in Canada.

Doris and Roger moved to Shaker Heights, Ohio where they began new hobbies of golfing, cross- country and down hill skiing, and curling. They were patrons of theatre, music and the arts, members of the Cleveland Skating Club, supporters of the Cleveland Playhouse Club, Cleveland Orchestra, and Cleveland Opera.

Her hobbies included: cooking, knitting, cross stitch, embroidery and other crafts. However, her passion was genealogy. She was a member of several genealogical organizations, too many to list here, but primarily: Western Reserve Historical Society, Daughters of the American Revolution, Colonial Dames Seventeenth Century, Daughters of American Colonists, and New England Women.

Doris will always be remembered as a loving and generous mother, sister, aunt, and grandmother and will be greatly missed. We love her immensely.