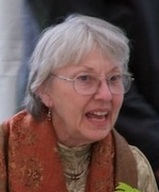 Donna Lee (Pitter) Pratt, age 76, of Shaker Heights and Cleveland, Ohio, passed away on April 26, 2019. She is survived by her husband, Patrick J. Holland, and her sister, Mary Lou (Charles) Montgomery of Walpole, New Hampshire, and many nieces and nephews. She was predeceased by her parents, Mary Katherine (née Becker) and Theodore Pratt, and her sister Barbara Ann Pratt.

A graduate of Shaker Heights High School, Pitter attended Mount Holyoke College, Western Reserve University, and Harvard’s John F. Kennedy School of Government. She earned her degree at Cleveland State University in the first class at the School of Urban Studies. During college she was employed as a free-lance model, danced, worked in theater and summer stock and was a cast member in the pilot episode of the original Star Trek series, which was filmed in Cleveland. In 1970 Pitter began work as an account executive for the A.L. Ostrow public relations firm, coordinating and directing the production of radio and television commercials.

A skiing accident sent her down a different trail, with the City of Cleveland. For 19 years she served in management positions for federally funded job training programs. In her spare time she managed, then purchased, residential apartment properties on Hessler Road in University Circle. She was instrumental in creating the Hessler Road Neighborhood Association and in establishing the Cleveland Landmark Commission. She was especially proud that Hessler Road became Landmark District No. 1. She served as the brick street’s unofficial mayor for decades, presiding over (and working hard at) many a street fair.

Pitter will be remembered for the weight of her key rings as well as her lifelong enthusiasm for Cleveland’s orchestra, art museum, and the Indians, not necessarily in that order.

The family wishes to thank the kind and dedicated staff in Reinberger Court and the 5th Floor Skilled Nursing Unit in the Judson Health Center at Judson Park, an amazing group of caring souls.

To order memorial trees or send flowers to the family in memory of Donna Lee "Pitter" Pratt, please visit our flower store.