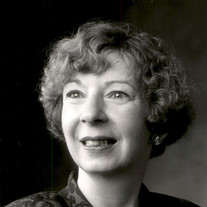 Dolores ("Dolly") Kreicher Minter died peacefully at home at Judson Manor in Cleveland, Ohio on June 21, 2017 at the age of 77. The cause was Alzheimer's disease.

During her commencement address at Hiram College in 1992, Dolly declared, "One person can make a difference." She was living proof. Born on August 4, 1939, Dolly was raised by loving parents in Lakewood, Ohio at the end of the Great Depression. An excellent student who also excelled at art, music, and homemaking skills of every sort, she enrolled in Baldwin-Wallace College. There, she met and fell in love with the sort of man she sought, someone who embodied the determination and virtue of author Gene Stratton-Porter's exemplary hero Freckles. That he was an African-American student, that her parents objected, and that interracial unions were illegal in 22 states did not deter her. He shared her values, and she could be resolute about doing the right thing. Dolly's marriage to Steve was the defining partnership of her life. They forged a lasting relationship replete with love, cultural interests, intellectual passions, and shared ideals. Dolly's experience led her to a lifelong commitment to making the world more inclusive and equitable. Her commitment was actualized through decades of community leadership and service.

At a time when few multi-cultural role models existed, Dolly raised three daughters - Michele, Caroline and Robyn -- as confident, independent women. Dolly created a home so nurturing, secure, and intellectually rich that they were all able to blossom. With her encouragement, Michele, Caroline and Robyn graduated from Shaker Heights High School in 1981, 1984 and 1987, and attended Yale College, Harvard College and Harvard College, respectively. Advanced degrees from City University of New York (Michele), The University of Oxford (Caroline), M.I.T. (Caroline) and Yale Law School (Robyn) followed. In a letter she wrote to her daughters in 1970, Dolly encouraged her daughters to "choose some useful area of work... .[and] look to the future as you make your choices so that you will have lasting as well as immediate satisfaction... " Her desires for her children were realized. Michele became the Vice Provost of Institutional Equity and Diversity at Princeton University, Caroline became the Scott and Donya Bommer Professor of Economics at Stanford University, and Robyn became the Partner-in-Charge of the Cleveland Office of the law firm Thompson Hine LLP. Her daughters' accomplishments were Dolly's greatest source of pride.

With a B.S. in Education at Baldwin-Wallace College and a Master's degree in Education from Cleveland State University, Dolly used her talents for nurturing and relationship-building to increase the reach of organizations that served others. One of the first places to recognize her strengths was Fairmount Presbyterian Church, where as an elder she helped launch Project Renewal, a program that provided meals and fellowship to homebound seniors and people with disabilities for decades. She also chaired the Fairmount Women's Association known as "The Guild".

Outside the church, Dolly served in leadership roles in a myriad of community organizations, including the Board of Directors of the Diversity Center of Northeast Ohio (formerly the National Conference for Christians and Jews) on which she served for more than 32 years. She helped transform that organization into an independent non-profit focused on training young people to be champions for diversity. She also served on the Board of Trustees of Baldwin-Wallace for 30 years, where she vigorously promoted the college's support of low-income and minority students while chairing the Board's strategic planning committee and chairing the annual fund campaign. For decades, she was involved with the Women's Committee of the Cleveland Orchestra and the Womens Council of the Cleveland Museum of Art and she also served on the Board of Directors of Fairhill Partners. Additionally, she was a speaker and educator for Planned Parenthood and spoke widely on diversity topics to civic organizations.

Many people and organizations celebrated Dolly for her accomplishments as a civic leader. Baldwin-Wallace Collage honored her in 1996 with the Alumni Merit Award and in 1997 with an Honorary Doctorate in Humane Letters. The Ohio Council of Fundraising Executives recognized Dolly as the "Fundraising Volunteer of the Year" in 1988, and the YWCA of Greater Cleveland recognized her as a "Woman of Achievement" in 1998. In 1991, the Diversity Center of Northeast Ohio jointly honored Dolly and Steve as "Humanitarian of the Year." The Shaker Historical Society also recognized them together as "Shaker Heights Visionaries" in 2011. Dolly also cherished "Dolly's Room" at the YWCA of Greater Cleveland's Independence Place, a supportive residence for young women aging out of foster care. An apartment there is named for her in recognition of a gift made in 2010 by her daughters in tribute to their mother.

Ideals drove Dolly's commitment to community service, but friends fueled her passions. From interactions that often started with "Hi, I'm Dolly. Who are you?" Dolly built deep and lasting relationships. Dolly remained close with friends from college, church, book club, and civic organizations throughout her life.

Dolly played her longest-lasting and most significant role as the life partner of Steve. Indeed, Dolly and Steve had a "partner mentality" long before "partners" joined the marriage lexicon. This shared mentality was most evident in the way they approached Steve's long career in public service. Dolly was Steve's sounding board, cheerleader, "eyes and ears" in the community, occasional critic, and trusted advisor. Dolly was by Steve's side throughout his tenure as Executive Director and President of the Cleveland Foundation, and she became a respected figure in the field of philanthropy in her own right, ultimately serving as the Interim Executive Director of the Community Foundation of Greater Lorain County.

Together, Dolly and Steve saw the world (traveling to 48 countries), attended thousands of theater productions, orchestra concerts and films, and read hundreds of books aloud. In 2010, doctors diagnosed Dolly with Alzheimer's. She declined slowly with long periods of relative stability punctuated by abrupt drops in cognitive and physical function. Throughout the process, Steve and Dolly were companions, with Steve ultimately caring for her full-time. As the shroud of dementia overtook her, the one thing that remained clear was her love for Steve.

Dolly was a devoted grandmother to five grandchildren. Her enthusiasm for them was boundless. She traveled often to New Jersey to spend time with grandson Brian and granddaughter Mira. For almost a decade, Dolly's daily schedule revolved around her local grandchildren Thomas, Shannon and Charlotte. As a grandmother, Dolly found a new outlet for her longstanding talents for mothering and homemaking. Supporting her grandchildren brought her great joy in her golden years.

Her family recalls Dolly's joyful, purposeful, and incomparable life in the book, Lighting the Way - The Life of Dolly Minter, which can be found at
https://view.joomag.com/lighting-the-way-the-life-of-dolly-minter/M0535276001498755947

In lieu of flowers, donations may be made to: Baldwin Wallace University, Attn: Steven and Dolly Minter Scholarship Fund, 275 Eastland Road, Berea, OH 44107, Diversity Center of Northeast Ohio, 3659 Green Road, Suite 220, Cleveland, OH 44122, or The Memorial Fund of Fairmount Presbyterian Church, 2757 Fairmount Blvd., Cleveland Heights, OH 44118 where a Memorial Service will be held on Friday, July 28, 2017 at 3 PM. A reception to follow in Andersen Hall. All are welcome to attend and celebrate Dolly's life.
To order memorial trees or send flowers to the family in memory of Dolores Minter, please visit our flower store.