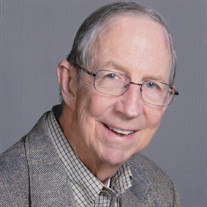 Dennis was born on December 3, 1937 in Cleveland. He was the son of Marion Hopwood Kelly and Ralph Kelly. Dennis and his late brother, Michael Kelly (Carolyn), grew up in Shaker Heights, OH. He graduated from Shaker Heights High School in 1955 and from Miami University in 1959. Dennis also received an Associates Professional Management Certificate from John Carroll University in 1974.

He met Nancy Swearingen at a young adult church group called Guys & Gals. After getting married on December 30, 1961, they moved to La Grange Park, IL so that he could begin work as a salesman for Republic Steel. In 1967, their son Stephen D. Kelly was born. A year later the family moved to Shaker Heights. In 1970 their daughter Kathleen K. Ptacek (nee Kelly) was born. The family lived in Shaker Heights for the next 25 years, when Nancy and Dennis moved to South Euclid.

Dennis continued at Republic Steel for 22 years, working his way up to Manager of the Pipe Sales Division. After leaving the company in 1982, he held executive positions with MTD, Baxter Tube, Star Paper Tube and Caraustar before retiring in 2002.

Dennis' activities and volunteer work were representative of his wide variety of interests and passions. He was a long-time member of St Paul's Episcopal Church, serving as senior warden, the archivist, leader of the job seeker's group, and chalice minister, among other volunteer positions.

He was also a long-time member of the Cleveland Skating Club, where he enjoyed playing tennis, working out and socializing. His passion and vision for the Club manifested itself in his volunteering to serve as Acting General Manager, joining several committees, and founding the Cleveland Skating Club Foundation, whose mission is to provide swimming pool access and lessons for inner city children.

Dennis derived great joy from singing with the Cleveland Messiah Chorus, who has performed Handel's masterpiece annually for the past 95 years. He was an active member of the Play Readers, which has for decades performed plays for each other with script in hand. In his most recent performance, he donned a bathrobe to play the role of Teddy in A. R. Gurney's, The Black Tie.

Dennis volunteered as a community member of the fee dispute resolution panel, an arbitration panel of the Cleveland Metropolitan Bar Association. In recent years, he returned to playing competitive bridge, which he had enjoyed during college.

Dennis had recently moved from his house in S. Euclid to Judson Park in Cleveland, where he was settling into apartment living. He continued with all of his activities, including reading (mostly Word II and mysteries), seeing movies and plays, dining out and spending meaningful time with close friends and family. He touched many lives and will be greatly missed.
To order memorial trees or send flowers to the family in memory of Dennis Kelly, please visit our flower store.