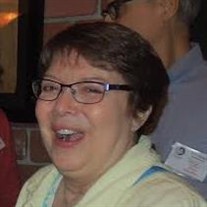 Deborah (Debbie) Ungemach (nee Anderson) died on December 21st at the age of 59 after a lifelong battle with immune deficiency disorders. Debbie was born in Massachusetts and grew up in Ohio until her senior year of high school when her family moved to Florida.

After graduating from high school, she attended Florida Technological University (now renamed UCF) where she received her BS in Communication Disorders. She then moved back to Ohio to attend graduate school at Kent State where she received her MA in Speech/Language Pathology. Over the years, Debbie worked in a variety of settings including acute care and pediatric rehabilitation. She was coordinator for the Traumatic Brain Injury unit at Health Hill Hospital for Children, Youngstown Public Schools, Skilled Nursing Facilities, and private practice. She continued to work until 2007, when symptoms began to intensify. She endured over 700 surgeries, hospitalizations, and procedures as well as continuous use of IV antibiotics.

Debbie was married to Don, her beloved husband of 32 years. He spent his life lovingly caring for her. Debbie was the proud mother of two incredibly talented children, Seth and Olivia. She is also survived by her parents, Winston and Sally Anderson of Florida, brother Gary Anderson (Brenda Quidley), sister Wendy Anderson (Morey Epstein), aunts, cousins, nephews, nieces, inlaws and extended family.

Forest Hill Church Presbyterian was Debbie's religious home for over 30 years. She served as an Elder and Deacon on several boards and session, was a children's worship teacher and sang in the Chancel Choir for many years.

A Memorial will be held at Forest Hill Church , 3031 Monticello Blvd., Cleveland Hts., OH on January 7th at 1:00 PM. After the service, all are invited into Fellowship Hill to greet the family.

The family prefers that those who wish may make contributions in her name to Forest Hill Church Friends of Music, 3031 Monticello Blvd., Cleveland Hts., OH 44118, or University Hospitals of Cleveland, 11100 Euclid Ave., Cleveland, OH, 44106.