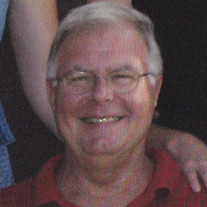 David Smith passed away after a 3 year illness with cancer on November 3 in the company of family and friends in his home. Dave will be remembered vividly by those who knew him for his intellect, quick wit, generous heart, and a larger than life presence.

Dave is survived by his dear wife and companion of 62 years, Irene ("Renie") Stifel Smith, and by their children and their spouses: Greg Smith and Kerry Connell, Ellie and Walid Khuri, and Claire and Todd Posius. He adored and was cherished by his four grandchildren: Shea and Delaney Smith, and Anthony and Helen Khuri. He was a beloved brother to his late sister Karen Helfrich and a close cousin to the late Mary Beth Mussen Blaskey.

Dave was born in Philadelphia but moved in his teenage years to Cleveland, where he met his high school sweetheart and future wife, Renie, at Shaker Heights Junior High School. He was a proud graduate of Amherst College, where he majored in English. He pursued a Masters in English at Occidental College after an inspiring teaching experience with special-needs children. He finished his education at Harvard Business School with an MBA, and those classmates remain close friends. Dave had an active career in consulting, with highlights including his role as Partner at Booz Allen Hamilton and running the Global Executive Compensation practice at Mercer. The most rewarding aspect of his career was mentoring young employees, most of whom were recent college graduates.

A civic-minded Clevelander, Dave enjoyed using retirement to fulfill his altruistic nature by giving back to his community. Dave was a volunteer math tutor in the Cleveland public school system, and he served on the Board of Directors for the McGregor Foundation. He was particularly committed, both in time and heart, as Co-founder and Board member of the Heights Youth Club. Dave and Renie were honored for their roles at the Heights Youth Club in the Spring of 2015. The kids and staff at the Youth Club were a source of great joy to Dave.

Dave has been aptly described as a renaissance man. Despite his facility with numbers, he was sustained by the arts. He and Renie enjoyed years of Thursday evenings at the Cleveland Orchestra where Dave particularly hoped for a piece by Shubert. He continued to read the classics with friends, and he traveled the world with Renie to see his favorite works of art, like Donatello's sculptures in Florence. However, Dave's greatest love was spending time with family and friends. Renie and Dave's global travels prioritized visits with family and friends from all aspects of life, yet their immediate neighborhood of Cleveland Heights and Chatfield Drive, their street of 40 years, held many of their dearest friends.

Dave was kind-hearted and a father figure to many. His sharp wit and huge sense of humor will leave few without a favorite "Dave story" or quote. His passing leaves a large hole, which we will fill with the many memories of this great man.

In lieu of flowers, contributions may be made in David's memory to the Heights Youth Club, 2065 Lee Rd, Cleveland Heights, OH 44118. Memorial Services will be held at Fairmount Presbyterian Church, 2757 Fairmount Blvd., Cleveland Hts., OH 44118 on Saturday January 2, 2016 at 2pm.

PDF Printable Version
To order memorial trees or send flowers to the family in memory of David Smith, please visit our flower store.