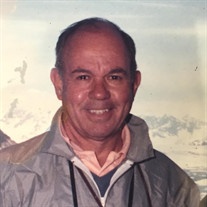 David Campbell Fulton, age 89, passed away on August 12, 2018. He was the beloved husband of Stella (née O'Brian), his wife of 63 years; devoted father to David (Claudia) of Cleveland Heights, Christopher (Eugenia) of Louisville, Kentucky, Laura Pinnick (Theodore) of Shaker Heights, and Margaret Fulton-Mueller of Hunting Valley; doting grandfather to Will (Beth), Sam (Megan), Alex, Brooks, Jessie, Max, and Laura; loving great-grandfather to Avery and Emily; loyal brother to John and Thomas (deceased); and adoring uncle to many.

Throughout his life, Dave showed a love of family, compassion for others, and dedication to community. He attended Cleveland Heights High School, and was president of his class. Dave graduated from Amherst College in 1951 and received a law degree at Cleveland Marshall School of Law. He served as an officer in the US Navy.

Dave and his brothers managed Fulton & Goss, Inc., a mortgage-banking firm, for thirty years. He later became Chief Executive of Inland Mortgage in Indianapolis, and led the business to national prominence. He was an inspirational leader who was respected by employees and col-leagues.

Dave was deeply involved in civic life. He served on dozens of boards and was president or chairman of many. In 1963 he was awarded the Outstanding Young Man of Cleveland by the Junior Chamber of Commerce.

Dave had a zest for living and shared his joy with those around him. He had many personal in-terests and was a member of several clubs, including the Kirtland Country Club, Chagrin Valley Hunt Club, and Tavern Club. He served as President of the Cleveland Skating Club in the 1970s. He loved to fish at the family camp on Ahmic Lake, Ontario, and vacation with family and friends at his home in Amelia Island, Florida. Dave died peacefully, surrounded by family.