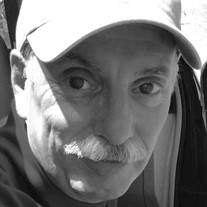 David U. Clough (1953-2016) died July 17, 2016 at his home in Cleveland Heights, Ohio.
Born in Cleveland, Ohio to Joseph B. and Jane U. Clough, David was a lifelong Clevelander. He attended Fairfax Elementary school in Cleveland Heights and graduated in 1972 from Hawken School. He graduated from Albion College where he studied ceramics and proved to be a talented potter.

In his youth he was an elegant soccer player and high jumper. Early on, he discovered an abiding passion for the outdoors and backpacking. The Adirondack mountains were especially favored, backpacking and vacationing in the high peaks region from the 1970s to as recently as 2015.

A lifelong student of spirituality, his personal journey was foremost daily, as he strove to find his most pure self and to be a good spiritual citizen of the world. He taught Sunday school and served on the church school board at St. Paul's Episcopal church in Cleveland Heights. He also pursued studies in Christian Science, the practice he was reared in.

Once diagnosed with MS, David became a stay at home dad, finding real happiness in the years spent raising his two daughters, Emily and Abbey. He never complained about the pay. He took great joy in his involvement in their daily activities and pride in their accomplishments. His wife of 28 years, Beth, remained resilient and a constant caregiver till the end.

David and his sister Lucy, were blessed with an especially close lifelong bond. They were a support to each other in the best and worst of times.

One of his great joys in the last many years was horseback riding at Fieldstone Therapeutic Riding Center. His weekly riding experience provided a peace and connection to horses that was truly enriching. He had many years of stronger health, happiness and focus because of Fieldstone.

His unique and corny humor and ability to recall with astonishing acuity childhood poetry, Bible verses, jokes, names and events will be missed. He was sustained in life by his deep faith, daily expressions of gratitude, his sense of humor, communing with nature, his loving relationships and the fellowship and amazing support of AA. (Not to mention the coffee from Phoenix).

In honor of David's fortitude, tenacity and gentleness, the family asks that donations be made in his name to Fieldstone Farm Therapeutic Riding Center, 16497 Snyder Rd., Chagrin Falls, OH 44023.

A Funeral Service will be held at St. Paul's Episcopal Church, 2747 Fairmount Blvd., Cleveland Heights., OH 44106 on Saturday, July 30th at 10:00 AM. A Reception will immediately follow the service.