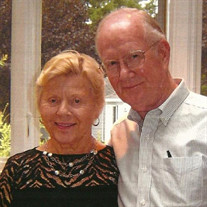 Cornelia Stott Richter Corrigan, born Dec.8,1938 in St. Paul, Minnesota, daughter of Mary Elizabeth Stott and Harold Charles Richter and beloved wife for almost 60 years, of John Herbert Corrigan, peacefully passed away on October 5th after a several year battle with Alzheimer's. Nikki, as her father named her when entering school (Cornelia a bit too formal) had an older brother Charles, who passed away at 19 in an accident and is survived by an older sister, Gretchen Law living in Chattanooga, Tennessee, with her son Christopher. Another son, Charles lives in Superior Wis. with his family. Nikki grew up on White Bear Lake, north of St. Paul with all its beautiful surroundings.

After attending various local and private grade schools, she traveled to Faribault Minnesota for high school at St. Mary's Hall, an Episcopal preparatory school for girls. This stage of her life provided her with many valuable skills which she put to good use as her life played itself out. A born leader, Nikki was a member of the Wooden Soldiers precision drill team captain her senior year and active on numerous clubs and sports teams, including horse back riding. The result; she ran a tight ship and was a capable leader, running her family and the many organizations she was involved with. When she directed an order, it was done!

John and Nikki met just a few weeks after she graduated on Saturday June 29th, 1957 at 3:30 PM in her kitchen on White Bear Lake. They went to a party that evening; John was totally in love. He proposed a month later before she went off to college. She said yes, her family approved and their marriage began on the 8th of November that fall. Over a span of 13 years Nikki, gave birth to Kimberly '58, Mark '60 , Matthew '61 and Elizabeth '70. She was a great stay at home mom. Once Elizabeth was older she taught pre-school, helped found a day care center in the Church that the family had been members of since moving to Cleveland in 1962 and served as wedding planner for the church as well. As a couple John and Nikki were very active at Christ Episcopal Church in Shaker Heights; from the Altar Guild to Sunday Nighters Social organization. For many years it was the center of their social life. Nikki was an avid tennis player and played at the Cleveland Skating Club for 20 plus years. In her mid 20's, Nikki contracted type 1 diabetes which ultimately affected her eye sight, limiting her activities, such as tennis.

Over the years, they would visit her family back in Minnesota then later in Florida where they retired. The trips to Florida were legendary; everyone had a ball. Harold and Mary were great hosts to their daughter, son in law and grandchildren. John's job kept him on the road much of the time; where he'd travel coast to coast. She'd have everything ship shape with the kids. John would come home and after a few days, Nikki would announce ""when are you going on the road again!" They would visit John's family in St. Paul, then New York City and finally in Santa Barbara, California where his parents lived and are interned. As a family, and as a couple, many a memorial trip was held both in and outside the country. Numerous birthday's and wedding anniversaries were celebrated.

The four kids had their own lives to work out and live fully, which they have and are very much still doing. Kim is married to Lou Carvell, with one son, Louis Jr., they reside in New York City. Mark & his wife Gigi (nee Markle), live in Medina, Ohio. They raised two daughters, Rebecca and Shelby & her son Julien. Matthew and his wife Nedra (nee Zielinsky), live in Aurora, Colorado and Elizabeth lives in Phoenix, Arizona. Collectively they have been a treasure for both Nikki and John these past 60 years.

Due in part to her diabetic condition Nikki ultimately dealt with memory loss and Alzheimer's and eventually moved to Arden Courts in Chagrin Falls; a truly caring community which served the entire family so beautifully. Nikki and John were tied at the hip everyday until her passing on October 5th, 2017. They were a beautiful, 60 year love story in every way. She will be interned at Cleveland's Lake View Cemetery in the Saunders family area. It is truly fitting since Nikki's ( Cornelia ) grandparents were Cornelia Saunders and Charles W. Stott of St. Paul.

The family requests in lieu of flowers that memorial donations be made to the Alzheimer's Association or Diabetes Association. A Memorial Service will be held at Christ Episcopal Church, 3445 Warrensville Center Road, Shaker Heights, Ohio 44122 on Friday, November 24 at 10:30 AM. A reception will follow the service. Private family interment Lake View Cemetery.
To order memorial trees or send flowers to the family in memory of Cornelia Corrigan, please visit our flower store.