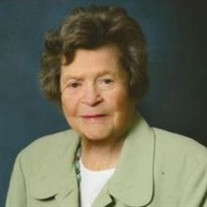 Constance Curtiss Manuel died Wednesday, June 24, 2015, at the age of 96. She was born in Cleveland Heights in 1918, the middle daughter of Henry Stiles Curtiss and Constance Stager Calkins. She was a sixth generation Clevelander descended from early settlers of North America and of Lorain, Cuyahoga, and Summit Counties. Her father was the founder and president of Curtiss, House & Company, a brokerage firm and her mother a librarian with the Cleveland Public Library. She grew up in Cleveland Heights and attended Laurel School in Shaker Heights from kindergarten through graduation and spent summers sailing in Blue Hill, Maine. She graduated from Simmons College in Boston going on to medical school at Western Reserve University where she received a M.D. degree and was installed in the Alpha Omega Alpha Honor Medical Society.

She completed internship and residency at University Hospitals in Cleveland and moved to Boston in 1946 at the Joseph H. Pratt Diagnostic Hospital at Tufts University. At Pratt she did research in endocrinology, specializing in lactation with her research paper recognized and requested worldwide. She was certified in Endocrinology and Internal Medicine. Connie Manuel returned to Western Reserve University and University Hospitals where she worked with John Dingle, M.D., in research and clinical practice in the Family Study Program. She taught at the medical school as a senior instructor in Clinical Diagnosis and Statistics. Connie Manuel is a former Board President of Hillcrest Hospital and Central School of Practical Nursing. She helped create and was on the board of Meridia Health System and was a Fellow for Life of the Cleveland Medical Library Association.

In 1960 she married Richard A. Manuel, a childhood friend and the son of John Sutphin Manuel and Susan Faye Andrews of Cleveland Heights. They enjoyed traveling together to destinations across the globe yet lived in the same house in Hunting Valley for 55 years. She joined her husband in his support and leadership of the Cleveland International Piano Competition and the Cleveland Institute of Music. She was a member of the Chagrin Valley Hunt Club, Kirtland Country Club, the 21st Century Club, the Novel Club, and the Gardening Club of Cleveland. She played tennis and golf and enjoyed gardening.

The family thanks Twyla Landon and Victoria Harris for their care and friendship to Richard and Constance. The family prefers that those who wish make contributions in her name to Hillcrest Hospital Annual Fund, PO Box 931517, Cleveland, OH 44193-1655 or to the School of Medicine, Case Western Reserve University, 10900 Euclid Avenue, Cleveland, OH 44106-7035.

Memorial Services will be held at Saint Christopher's by-the-River, 7601 Old Mill Road, Gates Mills on Tuesday, July 14, 2015 at 2 P.M. Interment will be at Lake View Cemetery.