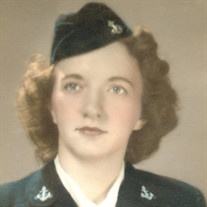 Clarice Marie Mercer (née Mercer), always known throughout her long life as Marie, passed away peacefully on the evening of February 23rd, 2017, at Judson Park in Cleveland, Ohio, at the age of 93. Marie was born in Boston, Massachusetts, on the 8th of October, 1923, to Esau Mercer and Margaret Parsons, both of Bay Roberts, Newfoundland, Canada. She is survived by her sisters Ellen Diming (Virginia), Grace Flewelling (Florida), and her two sons and their spouses, Glenn Alan and Ida Katherine (Edwards) Mercer (Ohio) and Robert Bruce and Catherine Jean (Groves) Mercer (Oklahoma). Her surviving grandchildren are, through Glenn and Ida: Nicholas, Natalie, Whitney, and Ian Mercer; and through Robert and Cathy, Rae Ann Wagner. Her husband Harold Whitney Mercer (better known as "Whit") predeceased her in 1976, from amyotrophic lateral sclerosis (ALS). Their earlier offspring, twins Grace and Harold, died soon after birth in 1953.

Marie began her working career in the clerical field, notably employed in the Bursar's Office at MIT in Cambridge (MA) for several years until she responded to her country's call, and enlisted in 1944 in the United States Naval Reserve (the "Waves"). In the Waves she proudly served as a Telegrapher until her honorable discharge in 1946. She met her future husband at this time, while he was serving in the USMC (the Marines) as an Armorer. They married on April 13, 1947, and moved to a house on Lincoln Street in Harold's home town, Beverly (MA). There they raised their family, with Marie continuing as a clerk and Whit as a factory worker. Whit learned new skills at night school (Wentworth Institute and Northeastern University), so that he was promoted to draftsman, a profession he pursued throughout the rest of his career. He worked at various firms in the Boston area (Mitre, Itek, Raytheon, etc.) but it was while he was at Honeywell that he was transferred to their branch in Oklahoma City in 1973. Glenn was already in college in New Hampshire, while Robert completed his education in Oklahoma. At this time Marie valiantly nursed Whit through his decline and eventual death from ALS. She then returned to employment at the Federal Aviation Administration, where she remained until her retirement in 1985, when she moved to La Casa, a development near North Port (FL). While she loved the sun and surf of Florida, she decided after a while that she wished to be closer to family, and so came in 1998 to Shaker Heights, home of Glenn and Ida. There she lived in apartments until late in 2012, when she moved to her last home, Judson Park (a retirement community).

Throughout her life Marie was most proud of her independence (a strength she especially relied upon in all her years of widowhood), her children (Glenn a management consultant, and Robert a police officer), and her service with the Navy (so we have chosen for her photo Marie in her Waves uniform). She continued her involvement with the Waves in retirement, as an active officer in the Gulf Coast Dolphins Waves alumnae association. She also enjoyed her membership in Eastern Star, and for any organization she joined, she was always eager to assist in making craft items or baked goods for fundraising activities. When alone, her favorite pastime was reading, especially her beloved "murder mysteries," whether by Agatha Christie or many others. At all times she remained a pet lover (admittedly favoring dogs over cats), and in her later years was greatly comforted by visits from Glenn and Ida's dogs Angus and Roger. (Therefore, any memorial donations in Marie's name could not please her more than if they went to an animal-welfare charity.) Her last years were challenging, and she lost much of her power of speech, but she remained devoted to her family. In fact, the last word Glenn and Ida heard her speak, during a happy visit with her just before her final decline began, as she beamed and patted Angus - was "beautiful." That is indeed a fine line on which to exit.

As Marie considered coastal Massachusetts her lifelong true home, no memorial service is planned for Ohio at this time, although we thank Brown-Forward Funeral Home for handling arrangements and hosting Marie's online memorial. Our intent is that Marie's ashes this spring be scattered at sea, by a ship of the Navy that she so loved, joined, and never really left.