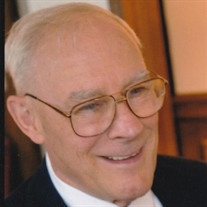 Pete enjoyed a long career as a real estate investor and developer, first with the A.B. Smythe Company (Smythe, Cramer/Howard Hanna) founded by his grandfather in 1903, becoming a founding principal of Cragin, Lang, Free and Smythe (now Newmark Grubb Knight Frank) in 1965. He returned to the family business as Executive Vice President and Director in 1981.
A lifetime Trustee of University School, Pete was awarded the Alumni Graduate Award in 1997 presented in recognition of outstanding service to his community and the school, having coached varsity football as a volunteer for many years and overseeing major building projects including the family-donated Smythe Pavillion, Wean Research Library, renovation of Britton Tower and construction of the Primary Education Center at the Shaker Campus.

A graduate of Williams College, Pete was President of its Alumni Association of Northern Ohio for many years, as well as a distinguished member of the Cleveland Area Board of Realtors and Society of Industrial and Office Realtors (SIOR), serving twice as its Convention Chairman. He was also actively involved with many charitable organizations including Cleveland Junior Olympics, Cleveland Sight Center, Cleveland Air Races, Diabetes Association, Greater Cleveland Sports Hall of Fame, Health Fund of Greater St. Louis (now part of United Way Services), and Playhouse Square, personally hiring a Wallenda to walk a tightrope across Euclid Avenue to celebrate the grand opening of the Palace Theater.

Known for his business motto "Whatever's fair," his fearless shooshbooming skiing style, motor-homing around the US and Europe with the whole "fam-damily", riding cattle to market from his 7000 acre ranch in Nevada, his many unusual vehicles including a London bus, Amphicar (boat/car) that he drove off the 9th Street Pier to the horror/delight of local fisherman, his beloved 280 SL Mercedes 2-seater convertible, and a 40 ft boat that sunk at its Florida dock (after sailing on it only once!), Pete was fun-loving, generous to a fault, a man of all seasons who never knew a stranger.

The family wishes to thank the caregivers at Arden Courts of Chagrin Falls for their gentle and loving care. He will be dearly missed by all.

The family prefers that those who wish may make contributions in his name to The University School, 2785 SOM Center Rd. Chagrin Falls, OH. 44022, Cleveland Sight Center, 1909 East 101 St. Cleveland, Ohio 44106 or The Memorial Fund of Fairmount Presbyterian Church, 2757 Fairmount Blvd., Cleveland Heights, Oh 44118 where Memorial Services will be held on Friday, November 4 at 1:00 PM.