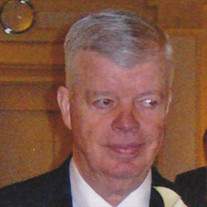 Chuck was a graduate of the Culver Military Academy and from there graduated from Cornell University's School of Engineering with a B.S. and M.Eng. He then served in the United States Army as a helicopter pilot serving in Vietnam and achieving the rank of Captain.

After working in New York City for Exxon Mobile, Chuck returned to the Cleveland area to work for Booz Allen & Hamilton where he eventually became the youngest Vice President of the company. While doing so he obtained an MBA from Case Western Reserve University. He then founded a management consulting company, Strategic Technologies, Inc. from which he retired.

Chuck was a member of the Royal Order of Jesters and the Fairmount Presbyterian Church. Chuck was an avid reader and was happiest looking out over Lake Erie from his beloved childhood home.

The family prefers that those who wish may make contributions in his name to The Memorial Fund of Fairmount Presbyterian Church, 2757 Fairmount Blvd., Cleveland Hts., OH 44118 where Memorial Services will be held in the Chapel on Saturday, November 4 at 3 PM.