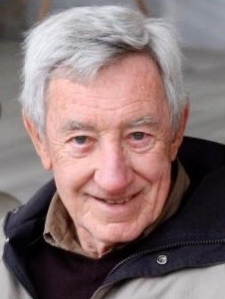 Born November 2, 1932 to Raymond and Mary Merchant in Whitehall, New York, he grew up in Troy, New York – the sixth of eight children.  Chuck was preceded in death by his siblings Marie Prothero (Scott), Louise Harrat (Donald), Rita Merchant, Raymond E. “Gene” Merchant (Beverly), Helen Ann Nelson (Bob), and Jack Merchant (Novie). He is survived by his youngest sister, Monica Killgallon of Troy, NY, the “baby” of the family. The family spent summers at a camp at Snyders Lake where he learned to fish and loved being on the water.

Chuck graduated from Averill Park High School.  As a young man Chuck performed many odd jobs, from wallpapering and painting homes to laying railroad tracks.  The last job convinced him to get an education and pursue a professional career. Following high school, he served in the U.S. Air Force for four years with his brother, Jack, and learned to be a radar operator.  He spent one year on active duty in Korea.   When he returned, upon advice from his brother, Gene, he decided to use the G.I. Bill to fund his college education and received a Bachelor of Sciences, Economics from Sienna College in 1959. In 1960 he transferred to Albany Law School.


While working a summer job during college as a busboy at Howard Johnson’s in Lake Placid, New York, he met Rosemary, she was a hostess and came to be the love of his life.  After a long distance courtship with many trips and letters between Ravenna, Ohio and Albany, New York, they were married on December 31, 1960.  Chuck became an integral part of the Prendergast family where his quiet and thoughtful advice was welcome.  He was a very driven individual who set goals for himself – such as owning his own home for his growing family.  Chuck’s work ethic was inspiring and applied to work and home life.


He finished his law degree in 1962 at Case Western Reserve University in Cleveland, Ohio and was admitted to the Ohio Bar the same year. He specialized in municipal law and was a well-respected law director for many communities in the Greater Cleveland area, including Richmond Heights, Hudson Village, Bedford Heights and the Village of Woodmere. His successful career included arguing several seminal cases in front of the Ohio Supreme Court. For years, the Merchant family dinners were served at 6:15 p.m. sharp so Chuck could make his many evening council meetings.

In 1963 Chuck and Rosemary bought a house in Shaker Heights, where they raised their family and became an integral part of the community.  Chuck enjoyed getting to know their neighbors at frequent gatherings.  Shaker Heights was the perfect place to raise their family because they found a community that shared their common values of celebrating diversity and a focus on education. They also found a spiritual home at the Church of St. Dominic where they volunteered in many capacities.

Outside of work, he could be found on his boat at the Lake house, in Chautauqua, New York.  He spent his days fishing, teaching the grandkids how to catch a fish off the dock or tinkering in the garage.  After retirement, Chuck and Rosemary spent summers at the Lake house from Memorial Day to Labor Day and formed deep relationships with their neighbors.  He enjoyed going to the casino – but only used his “fun” money.  He rewarded himself with the purchase of his speedboat, Fish-n-Fun, after the youngest child graduated from college.


Chuck enjoyed the simple things in life. A perfect day would include listening to jazz music while drinking red wine or sipping on a single malt scotch.  He was a lifelong learner and spent many hours reading a good crime novel or a history book.  He loved to travel with Rosemary both in the United States and abroad – he was always able to find a lake or a river to drop his fishing line into from the Bay of Bengal to a rainy lake in Ireland.  Working with his hands – tying his own flies, making jewelry and other handyman projects were some of his other passions.  He also had an insatiable sweet tooth and enjoyed Rosemary’s cooking.

Chuck enjoyed the silence of fishing and the quiet of the lake.  He made many long-lasting friendships and impacted those around him with his patience, calm and sense of humor.  He was a very good listener and always available for a bit of advice.

Chuck was a kind, hard-working and loving brother, husband, father and grandfather and will be missed by all. His devotion to Rosemary was unfailing, a role model for successful marriages, especially during Rosemary’s long illness when he never left her side.

The family requests that in lieu of flowers, donations can be made to Chautauqua Watershed Conservancy at https://chautauquawatershed.org/donation/ or mailed to 413 N. Main Street, Jamestown, New York, 14701.

The family would like to thank the devoted staff at Judson Park for their compassionate and loving care of their father.

To order memorial trees or send flowers to the family in memory of Charles Merchant, please visit our flower store.