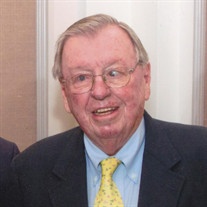 Charles was a graduate of Georgetown University and started his career in Washington, DC. Nancy and Charlie moved to Cleveland in 1966. He spent most of his career in the Biotech Industry becoming the Chairman and President of Life Technologies, a subsidiary of Dexter Corporation. After retiring he continued to be active working at the University of Akron in Government Relations and at the Defense Metals Technology Center in Canton. In 2008 Charlie established " Lamps by Charlie" where he became well known for designing, restoring, and repairing lamps of all kinds. This was a great joy for Charlie. He was a longtime member of Mayfield Country Club and a member of Harbour Ridge Yacht and Country Club in Palm City, Florida.

His greatest joy was his family. He and Nancy were a great team. He had a sense of humor that made everybody laugh and brought joy to all who knew him. He was so proud of his three sons and instilled great values which they have passed on to their children. His dog Chippy was his greatest companion.

Charlie loved his country and was so proud to be an American.

There will be a private family burial service at a future date. The family prefers that those who wish may make a contribution in his name to Hospice of the Cleveland Clinic, Cleveland Clinic Hospice, Philanthropy Institute DVI, 9500 Euclid Avenue, Cleveland, OH 44195.