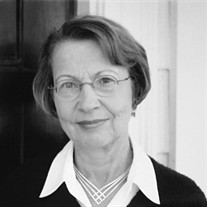 Caryn Foltz died peacefully on May 25th, 2017 at the age of 78. Daughter of the late R. Franklin Outcalt and Virginia Harris Outcalt. She is survived by her husband of 57 years, Henry Foltz; her son and daughter, W. Price Foltz (Kristi) of Chagrin Falls and Allison Foltz Milmoe (Andrew) Oakland, CA.; and four grand children, Alexandra Foltz, Benjamin Foltz, Teddy Milmoe and Hadley Milmoe and her brothers Richard Outcalt (Rosemary) of Seattle WA and Jon H. Outcalt (Jane) of Novelty, OH. Caryn graduated from Hathaway Brown School, and received her B.A. from Northwestern University in 1960.

Caryn had a deep interest in civic affairs, serving on the Board of Trustees of The Cleveland Playhouse, YWCA of Cleveland, Karamu House and the Friends of Shaker Square (President). Caryn was also among a group of dedicated women who worked to preserve and restore Playhouse Square. In recent years she enjoyed her volunteer work with the Flora Stone Mather Center for Women (CWRU) and in 2015 was recognized by the Center and the University as a Notable Woman of the Year. Caryn treasured summers at the Chautauqua Institution, and served as a Trustee of the Friends of the Chautauqua Conservatory Theatre. Her memberships included The 21st Century Club, The Intown Club, the Garden Club of Cleveland and the Cleveland Skating Club. In Delray Beach Florida, The St. Andrews Club and the Country Club of Florida.

Her personal passions were writing, art and acting in community theatre. She wrote and produced a 240 page family history and published Sand Script, an illustrated memoir tracing Delray Beach's recent development. Most of all, Caryn was thoughtful, gracious, caring and supportive to all who knew her and will be remembered for her creativity and hard-working contributions to important causes and true devotion to friends and family. Caryn wanted to make a difference. She did.

Services will be held at 4:30pm on Thursday, June 15th at Plymouth Church, 2860 Coventry Rd., Shaker Heights, OH 44120. A Reception for friends will follow at the Cleveland Skating Club, 2500 Kemper Rd., Cleveland, Oh 44120.
To order memorial trees or send flowers to the family in memory of Caryn Foltz, please visit our flower store.