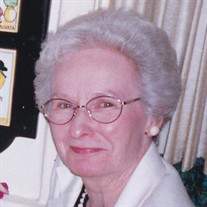 Born on April 10, 1935 in East Liverpool, Ohio she was a daughter of the late Malcolm W. and Mildred Taylor Thompson.

In addition, she is also survived by one brother John C. Thompson and his wife Margaret 'Peggy', of East Liverpool.

She was preceded in death by her sister Millicent "Millie" Thompson Mayers of East Liverpool.

Her father and brother were both chief executive officers of the Hall China Company in East Liverpool and she was an avid collector of Hall China teapots.

After college she returned to Cleveland where she was employed with the interior decorating firm Irvin & Company and was a dorm house mother at her alma mater Hathaway Brown.

She was a member of the Junior League of Cleveland, where she sang with the, Liltin' Leaguers.

She was an active member of the Garden Club of Cleveland who was a past co-chair of its White Elephant Sale, which was an important charity event, often billed as the world's largest rummage sale.

Accomplished in the kitchen, she was one of the original taste-testers for Stouffer's Frozen Foods in Solon, Ohio.

She enjoyed horseback riding as a youngster riding her cousin's Tennessee Walkers and later enjoyed trail rides and wild flowers during stays at the R Lazy S Ranch in Jackson Hole, Wyoming.

The family prefers that those who wish may make contributions in her name to Judson Foundation, 2181 Ambleside Drive, Cleveland, Ohio 44106 or to St. Paul's Episcopal Church (where she was a member for more than 50 years), 2747 Fairmount Blvd., Cleveland Heights, Ohio 44106 where Funeral Services will be held on Saturday, May 6th at 11 AM.