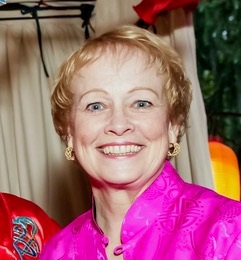 Carol Sherwin (nee) Werner, beloved wife of the late Michael Sherwin, step-mother to Martha “Sandy” Saunders Sherwin, wife of Andrew Kalt of Oakland, California and Michael John Sherwin, husband to Michelle Sherwin (nee) Thomas and three grandsons, James, Jack and Joseph all of Lakewood, Colorado, passed away very suddenly on March 5, 2020 while visiting family in Colorado. She was the sister of Bruce Werner of Rochester, New York and Lucille (Dolly) Faup (nee) Werner of Lakewood, Ohio and nieces and nephew, Jo Lyn Faup and Jack Faup both of Lakewood, Ohio and Karen Saurini (nee) Werner and Michelle Gasser (nee) Werner both of Rochester, New York. She was preceded in death by her parents Harold Werner and Mildred Werner (nee) Lamm.

Carol graduated from Conrad Weiser High School in Robesonia, Pennsylvania in 1963. She received an associate degree from the Mc Cann School of Business in Reading, Pennsylvania.

After graduation her family moved to Cleveland where she worked for several businesses before taking a position at National City Bank as an administrative assistant in their trust department.

Carol had a smile that could light up a room and an infectious laugh. She was known to all as a very generous and loving person  with family, friends and a wide variety of charities and organizations. She volunteered at UH Rainbow Babies and Children’s Hospital and was one of the original committee members who organized the Five Star Sensation Fundraiser in 1987.

Carol’s first love was spending time with her family and friends. She also enjoyed travel and over their 40+ years of marriage she and Michael traveled the world, often including family members and friends.

In lieu of flowers, contributions may be made to UH Rainbow Babies and Children’s Hospital in memory of Carol Sherwin at University Hospitals Institutional Relations and Development, PO Box 94554, Cleveland, OH 44101-4554.

There will be a private burial. Due to present circumstances there will be a Celebration of Life  for family and friends at a later date.

To order memorial trees or send flowers to the family in memory of Carol Sherwin, please visit our flower store.