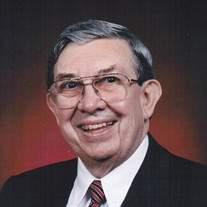 Carl Withers passed away peacefully on Saturday September 10 at the age of 92. He was born on January 26, 1924 to Edith DuGuay and Stuart Withers in Reading, Pennsylvania.

As a true representative of the "Greatest Generation", directly after high-school graduation Carl enlisted in the Army Air Corps as an Aviation Cadet. He obtained his pilot's wings and Second Lieutenant's Commission in February 1944. Carl flew 15 missions in Italy, and was discharged as a First Lieutenant. One of Carl's favorite war memories was celebrating his 21st birthday on the Isle of Capri.

After the war, Carl enrolled at Wittenberg University in Springfield, Ohio. There he met his beautiful wife-to-be Jenny Cory. Jenny hailed from Shaker Heights, Ohio. She's the daughter of Mildred and John Virgil Cory. Carl majored in political science, which seeded his interest in public and civic activities. Always active, Carl joined the Beta Theta Pi fraternity and as a Senior was Editor of the Wittenberg year book. Carl graduated in 1950, then attended Michigan Law School, from which he graduated in 1953. Thereafter Carl remained an ardent Michigan football fan, much to the dismay of his Ohio family and friends. Go Big Blue!

Carl and Jenny were married in 1950, and had three wonderful children, Wren, Jill, and Bradford. Jenny and Carl raised their family in a lovely coach house on Shaker Boulevard in Shaker Heights. Later Jenny and Carl moved to Pepper Pike, then to Laurel Lake Retirement Community in Hudson, Ohio.

Carl was energetically involved in a multitude of organizations, and a proud member of Who's Who in America.

Carl was a Board of Trustee member for these organizations:
a�� Soldiers and Sailors Monument
a�� Fairmount Presbyterian Church
a�� Cleveland Skating Club
a�� Ohio Curling Association
a�� Cleveland Rotary Club
a�� Torch, Inc.

Quick with a joke and a smile, Carl enjoyed life to the fullest. He adored Jenny, and was a dedicated father, lawyer, and Republican. Carl was a faithful member of Fairmount Presbyterian Church, where he served as a deacon. He delighted in sports, proudly co-founding bringing the Scottish sport of curling to the Cleveland Skating Club. Carl curled for fun and camaraderie, organizing teams and bonspiels (tournaments) for 50 years. He won championships, happily coaching beginners to become strong competitors.

Jenny and Carl shared a love of antiquing, topped off by living three decades in the noteworthy 1900s coach house on Shaker Blvd. Carl relaxed at home by watching his favorite sports teams: Michigan football, and the Cleveland Indians, Browns, and Cavaliers.

The family prefers that those who wish may make contributions in his name to The Shaker Historical Society, 16740 South Park Blvd., Shaker Hts., OH 44120 or to Cuyahoga County Soldiers' and Sailors' Monument Commission, 3 Public Square, Cleveland, OH 44114.