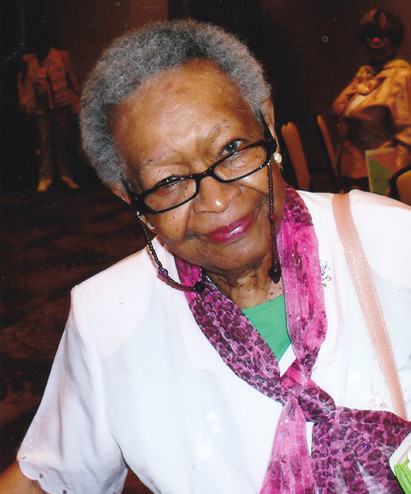 Byrdie Catherine Lee, a renaissance women with a bright and tenacious spirit left us on August 18, 2018. Born on April 19, 1927 in Norfolk, Virginia, she was the only child of Abner E. Lee and Bessie Butler Lee. She received a degree in Physical Education from Virginia State College and a Masters in Urban Studies from Cleveland State University's Levin College of Urban Affairs; from which she received a Distinguished Alumnae Award. But degrees did not define or limit her. Friend, family member, dancer, poet, playwright, author, jazz lover, historian, recreation specialist, social worker, city planner, social commentator, story-teller, rabble-rouser, companion on the way, and warrior for social justice. These are but a few of the adjectives that describe the force of nature that was Byrdie C. Lee.
She frequently acknowledged that she had had a wonderful life doing everything that she wanted to do. She travelled extensively from New York to Los Angles, from Vietnam to Hong Kong, from Tanzania to Trinidad including standing where Becket was killed in Canterbury Cathedral. She studied dance with Katherine Dunham when Eartha Kitt and Marlon Brando were there, then had her own dance company. A civilian employee of the Army she worked in recreation centers and service clubs at Forts Knox, Dix, Drum and Eustis as well as Saigon and Cam Ranh Bay, Viet Nam bringing in performers such as Stan Kenton and Louis Armstrong. She worked for the Hough Area Development Corporation and managed millions in block grant funds for city governments as a city planner and development administrator. She met almost everyone she wanted to meet, including W.E.B. Dubois, Bishop Desmond Tutu, Dorothy Height, James Baldwin, Marian Anderson, Marian Wright Edelman, Duke Ellington, Nina Simone, Johnny Hartman and Carmen McRae. She was within touching distance of Adam Clayton Powell, Martin Luther King, Jr., and Jesse Jackson and saw four presidents, Johnson, Carter, Clinton and Obama.
If you wanted to know what happened when in Black History, Diocesan History or Cleveland History you called Byrdie. Books and artifacts filled her house which were proudly shared with visitors. An avid storyteller, historian and genealogist she traced her family history back to runaway slaves on the Underground Railroad and tried to write the story of their lives and her own in a compilation of stories under the title Of Great Value and Then There was the Time. She has written, compiled and in some cases self-published a number of books and poems; histories, life memories and tours, as well as plays. These include Viet Nam Memories, A Tour of Lake View Cemetery, and Black History Tour of the City of Cleveland, The History of Christ Episcopal Church and Milestones of Black History in the Episcopal Church. She received a Joyce Whitley Play Writing Award from Karamu House that included a staged reading of her play. Some of her plays include Black is the Color of My Homework Assignment, Doers of the Word: The Story of Absalom Jones and Richard Allen, Proud Song Testament: The Story of Pauli Murray, and That House in Oberlin: The Life of John Mercer Langston. Other writings have appeared in books and magazines, including two poems published in Race and Prayers, edited by Malcom Boyd and Chester Talton.
Byrdie loved God and loved her church. A fifty plus year member of Christ Episcopal Church Shaker Heights she taught Church School, sang in the choir, served on the Outreach Committee and the Vestry. She was among the first women in the Diocese of Ohio to be licensed as a Lay Reader, conducting services in nursing homes, hospitals and throughout the community. Byrdie also served as a Chalice Bearer and Lay Eucharistic Visitor taking communion to those unable to come to church. On the Diocesan level she served as a member of The Board of Episcopal Church Women, The Episcopal Services Foundation, The Tanzania Companionship Committee, The Prayer Commission, The Racial Justice Commission and the Commission on Ministry. She was the recipient of the Third Annual Absalom Jones Award and the 2018 President's Award from The Wilma Ruth Combs Chapter of the Union of Black Episcopalians. She was the 2017 recipient of the Bishop's Medal at the Episcopal Diocese of Ohio's annual convention.
A 25 plus year member of Alpha Kappa Alpha Sorority, Inc., Alpha Omega Chapter, Byrdie was committed to the sorority motto - Service to All Mankind. A special focus for her was the chapter's youth programming especially planning the curriculum for the Leadership AKAdemy, a leadership and personal development program for high school students. She made use of her community development skills to help Alpha Omega Chapter complete the construction and opening of the Ivy Plaza, a 55 unit senior high rise apartment building. Byrdie sang in the Ensemble and served as Chaplain and Public Relations Officer for Alpha Omega Chapter.
Byrdie's was a life well lived. She loved people and she loved dogs. She never meet a stranger, touching countless lives with her infectious spirit. She is probably up in heaven telling anyone who will listen what's what. Finally, Byrdie loved to party, so rather than mourning, her cousin Dr. Carol S. Franklin and a host of family and friends are celebrating her remarkable life.

Those who wish may make contributions in her name to the Christ Church Foundation, c/o Christ Episcopal Church, 3445 Warrensville Center Rd., Shaker Hts., OH 44122, where Funeral Services will be held Saturday, September 1st at 11 AM Interment will be in Glen Allen, VA.

To order memorial trees or send flowers to the family in memory of Byrdie Lee, please visit our flower store.