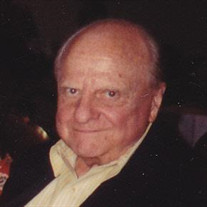 Bruce F. Stauderman, of Orange Village, OH, died Monday, July 11, 2016 at the age of 97. Born in Jersey City, NJ, he was the son of Herbert H. and Helen Stauderman and twin brother of Herbert A. Stauderman. He was raised in South Orange, NJ, and graduated from Columbia High School, before attending Syracuse University. During World War II, Mr. Stauderman started in the Essex Troop and served in the 102nd Cavalry. Mr. Stauderman became a member of the Army Intelligence unit serving overseas, and under the Army's auspices, he wrote and produced a radio program entitled "The Winged Horse," which told the story of the 102nd Cavalry.

While stationed in Paris, Mr. Stauderman met his future wife, Claude Outhier Dorsenne. Following the war, they settled in New York City, where he worked in both television and radio.
Mr. Stauderman had a distinguished career in advertising, beginning at Meldrum and Fewsmith of Cleveland, Ohio, where he worked on campaigns for Glidden Paint, Republic Steel and Bonnie Bell. Later, he joined Ogilvy and Mather in New York City, producing TV commercials. His advertising for Shell Gasoline earned him a CLIO award, one of many he received throughout his career. In addition, his presentation, "Anatomy of a Television Commercial", was seen around the world.

Continuing his work in advertising and writing, Mr. Stauderman lived in Paris, France; Lavenham, England; Denver, Colorado and West Palm Beach, Florida. He and his wife settled in Orange Village, OH in 2007, where he wrote a book entitled "What the Guide Books Don't Tell You" about traveling in England. He also wrote several screenplays and articles on writing and advertising.

During his life, Mr. Stauderman had an inquisitive mind and enjoyed playing chess, discovering the etymology of words, and telling great stories. He is survived by a niece and nephew, Lynda A. and Kenneth A. Stauderman, both of San Diego, CA. He was predeceased by his wife and twin brother.

To order memorial trees or send flowers to the family in memory of Bruce Stauderman, please visit our flower store.