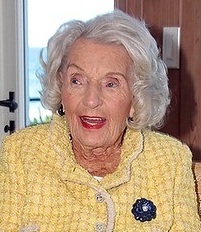 Betty Jane Weimer, a lifelong resident of Cleveland, passed away peacefully at her home in Gulfstream, Florida on September 28 at the age of 95. Mrs. Weimer was the only child of Agnes B. and William E. Caldwell, a prominent Cleveland industrialist. She attended the Hathaway Brown School and Ogontz Jr. College in Philadelphia. She was on her way to attend the Juilliard School in New York when she met Walter J. Oberndorf Jr., and, like many young women of her time, she decided on marriage instead of a promising career. Together they had three children. Mr. Oberndorf died in 1964. In 1971, Mrs. Weimer married Benjamin A. Weimer who died in 1983.

Mrs. Weimer, who was known as B.J. to her many friends, was a volunteer to many Cleveland organizations, including the Junior League, the Cleveland Sight Center, the Cleveland Museum of Natural History, and Hathaway Brown. She was known for the warm and gracious way she extended herself to others, never wanting anyone to feel left out. During her later years, Mrs. Weimer suffered from Alzheimer’s. The family wishes to thank Debbie Pittman, Willeen Childress, Annie Holloway, Mary Anne Voinovich, Linda Dowling and Jonathan Evans for their many years of loyal and caring service to her. Without them, and the love of her King Charles Spaniel, Crumpet, her life would not have been filled with the happiness and joy she experienced right to the end.

Mrs. Weimer is survived by her three sons, Walter C. Oberndorf, William E. Oberndorf (Susan) and Robert E. Oberndorf (Cindy) and four grandchildren. She is also survived by her devoted sister and brother-in-law, Caroline and Edward Oberndorf, who remained close to her throughout her life. A Funeral Mass will be said for Mrs. Weimer at St. Christopher by-the-River Church, 7601 Old Mill Rd., Gates Mills, OH 44040 at 4:30 p.m. on Friday, October 8 followed by a reception at the Chagrin Valley Hunt Club. The family asks that in lieu of flowers, donations be sent to the “B.J. Fund” at Hathaway Brown, 19600 N. Park Blvd., Shaker Hts., OH 44122.