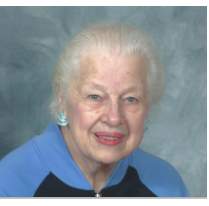 She was born August 15th, 1914 in Dayton, Ohio to adoring parents, John and Lillian Merrell.  She was an only child and decided early to always be kind, loving, and generous and to always wear a smile.  Growing up, she lived in a few different Ohio cities, including Columbus in 1922 when the Ohio State stadium was built.  Her dad being a football enthusiast, he took her to every home game.

She accepted Jesus Christ as her Lord and Savior at an early age and that faith became the solid foundation of her life. She was an active member of First English Lutheran Church until it closed and merged with Hope Lutheran Church (now Peace Lutheran Church) where she continued to be active as her health allowed.

Betty graduated from Shaker Heights High in 1931 at the age of 16 with the highest grade average as a senior. She loved tennis and track.

After graduating from college, she worked for the Ohio Bell Telephone Company. She was also studying voice with Lila Robeson (a contralto formerly with the Metropolitan Opera - https://case.edu/ech/articles/r/robeson-lila-pauline). After 3 years of saving money, she attended Eastman School of Music in Rochester NY. She then returned to Cleveland, working for Ohio Bell and again studied with Lila.  Her love of music would accompany her throughout her life. She loved anything musical - the Opera, the Theater, the Cleveland Orchestra, and Cain Park. She attended events when she could. She was still teaching piano lessons until she turned 100.

In fall 1944, friends introduced her to Phil Madden. At Christmas, she was engaged and they married in 1945. Shortly thereafter, they bought Pioneer Beverage in the Van Aken Shopping Center of Shaker Heights. They had two children. After they sold the business in the late 1960’s, Betty returned to school to get her teaching certificate from Cleveland State University.  In the 1970’s, she put her skills and knowledge to use teaching at Nathan Hale in the Cleveland Public School System until she eventually retired.

Betty loved to play bridge with her mother and friends. She loved doing the Cleveland Plain Dealer daily puzzles. She enjoyed playing solitaire, assembling jigsaw puzzles, 3 trips to France and all Cleveland sports – Indians, Cavaliers and the Browns.  She played golf until she was 88.  She loved to bowl and did that until her mid-90's.

She was extremely charitable and did a lot of volunteering.  She was even cooking meals and delivering them to older neighbors no matter the weather into her late eighties. She often played piano for the residents of various nursing homes in the surrounding area. She just loved helping people.

Betty moved from her Cleveland Heights home into her son's home in Parma Heights in 2016. Jim and his wife Dawn and their five children provided exceptional care and love for her.  Oh and yes, of course took the piano with her which she continued to play until her last days.

Betty is also survived by cousins, countless friends, neighbors, parishioners, and piano students. Anyone she met - loved her and adored her. Her demeanor, love and grace for this earth and everyone in it was infinite. Anyone who knew her was better off for having known her.

Instead of flowers, for those who wish to do so, gifts can be made to the charity of your choice or the Nature Center at Shaker Lakes, 2600 S. Park Blvd, Cleveland, OH 44120 or online at shareklakes.org/tribute-gifts

A memorial service will occur at Peace Lutheran Church, 3740 Mayfield Road. Cleveland Heights, OH 44121, Saturday, August 14th, 2021 at 10 AM.  There will be a light reception to follow in the Church Fellowship Hall..