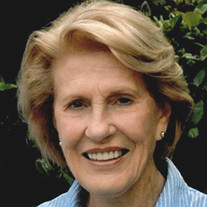 Born and raised in Boise, Idaho, Beth loved the west and developed a passion for horses and animals.

As a young lady, she became an accomplished equestrian. While at a dance in Boise, she met Bob Gunton, a US Air Force pilot who had just returned from the European theatre. So began a life-long journey that eventually took them back to Bob's hometown of Cleveland.

Outgoing, caring, and kind, Beth was a wonderful mother and grandmother who offered unconditional love for her children and grandchildren.

Known as Gram and Grammy to her five grandchildren, Beth was always quick with a smile or embrace. Beth put others before herself in all that she did, and was happiest when surrounded by family and friends.

She was preceded in death by her brothers, Donald and Roy Jacobs.

The family prefers that those who wish may make contributions in her name to The Geauga Humane Society Rescue Village, 15466 Chillicothe Rd., Novelty, OH 44072.