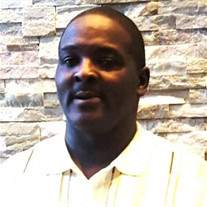 Bernard was called from labor to reward on January 1, 2017 as he slept quietly in the arms of his loving wife Madeline at his home in Euclid, Ohio.

Bernard made his entrance into the world on March 31, 1970 the son of Annie Marie Dorsey and Clemie Hampton. As a child Bernard and his siblings were inseparable and he was the leader of the pack taking care of them and sometimes getting them into mischief. Bernard and his siblings attended church as children and he accepted Christ in April of 1994.

As a youth Bernard excelled in sports, he was a sports enthusiast and could have been a professional football or basketball player. An avid swimmer Bernard loved going to the beach and would carry his Mom on his back more than 50 yards beyond the 'no swim zone'. As a teen he was on the Kerruish Park Swimming Team and was a lifeguard for the City of Cleveland Parks and Recreation Department.

A charismatic and charming young man Bernard would meet his life partner in Junior High School where they were one another's first loves. Although life would take them on separate journeys fate would cause their paths to cross again where they would rediscover the pubescent innocence of the love they shared in the seventh grade. Bernard and Madeline Chappell would finally seal their lifelong love in marital bliss on June 20, 2004 and Madeline would forever have her 'Tutu'.

Bernie as he was called had a playful personality and often would refer to himself as Bernie Mac Jr. and thought he was the 'Master' when it came to playing spades. He was an engaging, persuasive, articulate, and hardworking young man who could sell a hamburger to a vegan and could talk his way into any position he wanted. Although Bernard held many positions throughout his life he found the most joy as a self-employed landscaper who enjoyed working with the earth and elements in which he found a sense of serene peace.

The family asks that those who are able contact Madeline Hampton for contribution information.

A service of Home Going will be held at 11am on Monday, January 9 at Brown-Forward, 17022 Chagrin Blvd, Shaker Hts., OH. FRIENDS MAY VIEW ONE HOUR PRIOR TO THE SERVICE.