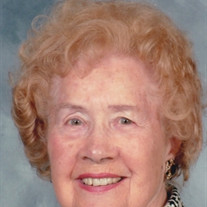 Barbara Claire Love Hall Thatcher Williams was born October 16, 1914 to parents Edward and Claire Hall in Cleveland, Ohio. She was preceded in death by husband Harry Pemberton Thatcher, husband Harter Whiting Williams and son Randall Hall Thatcher. She is survived by dear daughter Carol Pemberton Thatcher, daughter-in-law Mary Hartman Thatcher, stepdaughter Carol Williams Gould, granddaughter Gayle (Russ Udelhofen)Thatcher, grandsons Randall (Jennifer) Thatcher, and Edward(Molly) Thatcher, and step-granddaughter Laura (Adam) Darby-Singh. Her loving great-grandchildren include Anna, Megan, Clayton, Desmond, and Viktor Thatcher. She also will be missed by nephews Larry (Lo) Thatcher and Clark P. Thatcher and their families and special neighbor Sally Nousek. Barbara attended Roxboro Junior High, and graduated in the first June class of Heights High School in 1932. She went on to Flora Stone Mather College of Case Western Reserve University where she graduated in 1936 with a major in English and was a member of Delta Phi Upsilon sorority. She went on to finish the Graduate Course of the Prince School of Retailing at Simmons College in Boston, 1937. Barbara became one of the first women Personnel Managers in the country. At the original Marshall Fields Department Store in Chicago, she was in charge of thousands of part-time workers. She left Chicago to marry Harry Thatcher of General Electric Lamp Business Group and moved 13 times, before settling back in Cleveland, Ohio. In Cleveland, she volunteered at the Florence Crittenton Home for 20 years. She was able to join Hereditary Societies that her family was interested in. She was a Past President and a founding member of Richard Cutting Colonial Dames of Seventeenth Century, Past Regent of Charter Oak Daughters of the American Colonists, and Past Regent of Moses Cleaveland Chapter Daughters of the American Revolution. Barbara was a sixth generation direct descendent of Christian Waldschmidt , whose home in the Cincinnati area is a DAR museum. She attended the DAR Congresses 45 years in Washington, D.C. She also enjoyed membership in New England Women, US Daughters of 1812, Early Settlers and The New England Society. She also was on the Genealogical Committee of the Western Reserve Historical Society and volunteered for many years at their Genealogical Library.

Her interests also included the Inter-Colony Book Club with her love of reading, Intown Club from 1995 to present, and Playhouse Square Broadways Series in which she was a subscriber for over 60 years.
A world traveler, she loved traveling with family and friends. She enjoyed air travel which began with her first ride during the Cleveland Air Races in 1930. Her first European cruise was in 1939 was with cousin Pat Randall Hall and college friend Blanche Daugue Hall. Her favorite trip was on the Orient Express from her favorite city Paris to Vienna, with daughter Carol. She traveled to Alaska four times and the last trip with son Randy was very special to her. She loved flowers and traveled to Holland with daughter-in-law Mary Thatcher and granddaughter Gayle Thatcher to see the tulips. She loved adventure and went to the Bahamas to swim with the dolphins with daughter Carol Thatcher and stepdaughter Carol Gould. She spent her 86th birthday climbing the ruins of Machu Picchu in Peru and seeing the wildlife of the Galapagos Islands. The family wishes a special thank you to Denise, Yvonne, Cindy, Gwen and all of the staff at Judson Park since 2007 along with Hospice of the Western Reserve who made her last days peaceful and comfortable. Those who wish may make contributions in her name to The Western Reserve Historical Society, 10825 East Boulevard, Cleveland, OH 44106, The Hospice of the Western Reserve, 300 E. 185th St., Cleveland, OH 44119, The Church of the Covenant, 11205 Euclid Avenue, Cleveland, OH 44106, or charity of your choice. A gathering of remembrance will be held at the Funeral Services on Tuesday, March 29th at 11 AM, at Church of the Covenant, 11205 Euclid Avenue, Cleveland, OH 44106. Entombment will follow at the Knollwood Mausoleum, Mayfield Heights, OH. FRIENDS MAY CALL AT BROWN-FORWARD, 17022 CHAGRIN BLVD., SHAKER HTS., OH, MONDAY, MARCH 28TH FROM 5 TO 7 PM.


PDF Printable Version
To order memorial trees or send flowers to the family in memory of Barbara Williams, please visit our flower store.