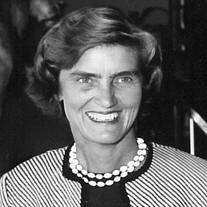 BARBARA BROWN WEBSTER, known to her family as Barbar and to friends as Bobsie, Babs, or Mrs. Webby, passed away after 96 extraordinary years on August 11, 2016.

Born on April 5, 1920 to Fayette and Geraldine Walker Brown, she was educated at Hathaway Brown School, the Milton Academy and the French Institute in New York City. Soon after graduation, she served as a nursing aide in the Frontier Nursing Service providing health care to families in rural Kentucky. This was the start of a lifetime devoted to community service.

In the 1950s, she began a lifelong association with the Cleveland Museum of Natural History. She first joined the Women's Committee and served as its president for 10 years. During that time she was elected to the museum's Board of Trustees, ultimately serving as vice-president during 7 years of extraordinary growth and transformation. In 1972 she became a full time member of the staff and directed the public services division of the museum, overseeing its volunteer programs, lectures, museum store and public events. During her tenure, she also served as Museum Historian, co-founded the Natural History Art Society, and managed the museum's Fine Arts collection. She was recognized with the Outstanding Staff Achievement Award in 1980 in recognition of her efforts. She retired at age 75 but continued to serve as a Life Trustee of the Museum, the highest honor of the Board.

Her enthusiasm for and service in the name of natural history were not limited to the museum. Barbara was also an avid birder, traveling on expeditions to places like Arizona, Texas, New Jersey, and Trinidad, but also maintaining an active presence in the local birding community. In particular, for 40 years she led public bird walks at Lantern Court at the Holden Arboretum. She also served as volunteer editor of the arboretum's newsletter, the Arboretum Leaves, for 10 years.

She was active in the Garden Club of Cleveland and served as its president. She was recognized by the Garden Club of America with their Conservation Committee Award in 1974 for 'sharing her knowledge of conservation, ornithology, and biology, while promoting environmental education through writing, teaching, editing, television and practical leadership.'

Barbara was a devoted and faithful member of St. Hubert's Episcopal Church where, for decades, she sang in the choir, served on the music committee, and was the church's evangelist of hospitality. She took great pleasure being a member of this community and proud that her mother picked the riverside location for the church.

Barbara was an unparalleled animal-lover and enjoyed the company of 19 dogs and one goat over her life. Over the years her household also hosted raccoons, hawks, falcons, owls, bitterns, swans, beavers, eagles, crows and a skunk.

She was a loving Aunt Bobsie to countless relatives and she was fiercely loyal to a wide network of friends. She treasured the Friday lunches with her fellow nonagenarians at the Kirtland Country Club where she was a member for many years. Over the years she was active in the Folio group, the Colonial Dames of America and the Recreation League of Cleveland. And for years she was a member of the Canasta group, close friends whose weekly meetings were filled with laughs, gossip, and occasionally cards.

But, most of all, Barbara loved her family - her sons, daughters-in-law, grandchildren, and great-grandchildren - and was happiest in their company. Hers was an incredible spirit of love, compassion, generosity, and fun.