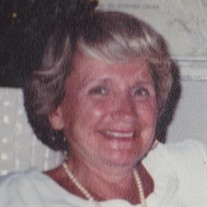 The family requests no flowers, but memorial gifts may be given to Hathaway Brown School, the Cleveland Sight Center or the South Franklin Hospice. A Memorial Service is planned for Thursday, September 15 at 4:30 PM at St. Christopher's by the River.

To order memorial trees or send flowers to the family in memory of Barbara McKinney, please visit our flower store.