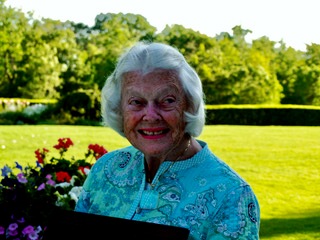 Barbara (Bobbie) Hoyt passed away peacefully at her home on May 6th, 2022. Bobbie was fast approaching her 101st birthday as she was born July 13th, 1921. Bobbie spent her time between Cleveland, Ohio and Boca Grande, Florida and was the mother of 3 children, Jim, Peter and Terry. Bobbie graduated from Hathaway Brown School in Cleveland and attended Sara Lawrence College in New York. She married Elton (Pete) Hoyt III just prior to his departure for England as a B-17 pilot during WW II. She served her community as an active board member of University Hospital’s Rainbow Babies & Children’s Hospital, was deeply involved in the Garden Club of Cleveland, and was an influential participant in the management and well-being of Lochland School located in Geneva, New York, where her daughter Terry resided for many years. Bobbie was very much a grounding force for her family, providing a source of steady guidance and support to her oftentimes “spirited” family members.  She was a great conversationalist and active participant in all things put in front of her and had a great sense of humor, which was perhaps her most admired trait.  She loved all animals, but especially her Cavalier King Charles dogs, and enjoyed spending time outdoors, fishing, hunting and sports of all kinds. Additionally, she was a tremendous hostess, always providing the little details that made all of her events exceptional and fun.

Bobbie was preceded in death by her husband Pete, her son Peter, her daughter Terry and her sister Martha Higgins Laundon. She is survived by her oldest son Jim (Fofie), Jacque Hoyt, eight grandchildren, Callie (Adam) Elton, Andrew (Courtney), Schuyler (Billy), Dana (Russell), Andrew Melamed (Ashley), Ralph (Karem), Robert (Bailee) and five really great grandchildren. A private ceremony celebrating Bobbie’s life will be held at the Mentor Cemetery at a future date. The family requests that any donations that you wish to make in her name be directed to Lochland School, 1065 Lochland Road, Geneva, New York 14456.

To order memorial trees or send flowers to the family in memory of Barbara Hoyt, please visit our flower store.