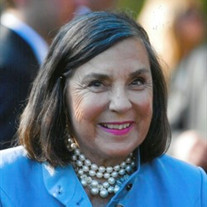 BARBARA "BOBBIE" CARR (NEE BRIGGS), age 85, passed away peacefully on February 26, 2015. She was surrounded by her family.

Bobbie was born on January 24, 1930 in Flushing, New York to Opal and Howard Briggs. She attended Wellesley College and graduated in 1952.

It was during her Junior year at Wellesley that she caught the eye of a first year Cleveland-born Harvard Business School student named Buck Carr whom she married in May of 1953.

Their lives were filled with travel, friends and family. Along the way, they purchased and restored an 1850's whaling captain's house in Edgartown, MA. The home is still a favorite for her children and grandchildren and a special place filled with happy memories, love and friends.

While in Cleveland, Bobbie kept herself busy with numerous philanthropic and community organizations including The Junior League, Sunbeam, The Cleveland Museum of Art, The Historical Society, 21st Century, Shaker Lakes Garden Club and The Decorative Arts Council. She was also a proud member of the Daughters of the American Revolution and Colonial Dames.

Bobbie was the beloved wife of the late Frank B. Carr "Buck". She is survived by Kimberley C. Harmon (Mark) of Kentfield, CA; F. Briggs Carr (Moira) of Chagrin Falls, OH; Cameron Carr Given (David) of Seattle, WA and Courtney B. Halle (Samuel) of Manhattan Beach, CA; and grandchildren Hailey, Trevor and Henry Harmon; Brett and Cecily Carr; Hollander and Augusta Halle, step-grandson Rory Given and her brother Wally Briggs of Quartz Hill, CA.


PDF Printable Version
To order memorial trees or send flowers to the family in memory of Barbara Carr, please visit our flower store.