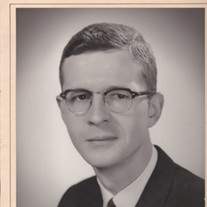 He was born to Randall and Carmen Burk Fullmer in Lakewood, Ohio on July 16, 1934.

Arthur attended and earned degrees from Dennison University in Granville, Ohio and Business Administration (MBA) from the Wharton Graduate School of Business in Philadelphia, Pennsylvania.

He was an enthusiastic entrepreneur who established and operated his own successful businesses. His professional career included business management, media and magazine publishing in New Jersey, New York and Cincinnati, Ohio. In his personal life, he was a devoted and tireless caregiver to both his wives and family.

He enjoyed flower gardening and was recognized in his communitywith awards for his skills.

He was a lifelong Ohio State Buckeye fan who was happy to witness the football team become national champions in 2015.

Following family graveside services in Lakewood, Ohio a Memorial Service will be held in The First Baptist Church of Greater Cleveland 3630 Fairmont Blvd, Shaker Heights, OH (216-932-7480) on Wednesday, February 11 at 2:00 PM, to be followed by a brief reception.