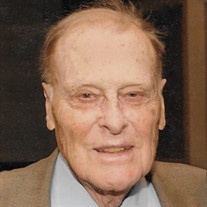 Arthur Douglas Baldwin, II, age 85, passed away Oct.27th after a valiant battle against prostate cancer. The world has lost a dedicated public servant, committed civic leader, and loving husband and father. Many will miss his steady, quiet guiding hand.

Art graduated from The Hotchkiss School in Lakeville, CT and Yale University (Class of '55.) He served as a 2nd Lt. in the 4th Armored division in Fort Hood, TX. His working career began at Cleveland Graphite Bronze (now Clevite) followed by several companies of his own including Protective Chemicals (a rustproofing firm) and Arthur Treacher's franchises. He co-founded Patrick-Douglas, a firm that specialized in finding new management positions for displaced executives, and he finally formed Artgo Inc., an executive search firm specializing in mid-level management.

More important, Art served The Village of Waite Hill for over 50 years, first on the Village Council and then for 46 years as Mayor, the longest tenure in Lake County history and the longest continuous service in Ohio. His philanthropic leadership included board member and past president of Vocational Guidance Services (VGS,) where he was a recipient of the Herbert E. Strawbridge Lifetime Achievement Award and represented the 3rd generation of his family to aid this organization; he was also a long serving board member and past president of The Fine Arts Association in Willoughby, OH.

As for his passions, they were the five women in his life (or six if you count the dog), his lobster boat cruiser Dasbote, and golf... not always in that order!