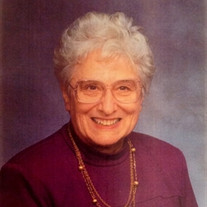 My Life - A Benediction

My Promise: I will try.

I did the best I could.

My Hope: The world will ever be

a better place because I was here.

A lifelong Girl Scout and a passionate advocate of global understanding and international friendship, Arlene found multiple ways to "use resources wisely" and "make the world a better place."

Born on March 31, 1926 in Moreland Township, Lycoming County, PA, Arlene moved with her family to Canton, OH in 1927. Arlene's interest in Girl Scouting began while she attended Summit School in Canton. She became an Intermediate Girl Scout in 1937 and was a Senior Girl Scout in a city-wide troop at Canton's former Lehman High School.

Arlene was one of 10 students from across the country to be awarded a full-tuition scholarship to the Flora Stone Mather College of Western Reserve University in Cleveland. After graduating with a major in chemistry in 1949, Arlene worked as a chemist at the Babcock and Wilcox Research and Development Center in Alliance and as an editor of chemical research reports. She also held a special research assignment in Paris, France.

While living in Alliance she was the co-leader of the Girl Scout troop at the First Baptist Church. She also organized a Girl Scout troop at the Fairmount Children's Home near Alliance. During the summer of 1953 Arlene was one of two delegates from the United States who participated in an International Leaders' Conference in Holland sponsored by the World Association of Girl Guides and Girl Scouts. In appreciation of her many contributions to Girl Scouting in Alliance, she was presented with the Thanks Badge, the highest honor that can be given to an adult Girl Scout.

Her volunteer work with the Girl Scouts led to her accepting a position in 1954 with the Girl Scout Council in Baltimore, MD where she successfully integrated Girl Scout troops and camps in the Baltimore area. In 1977 Arlene was recruited to work at the national headquarters of Girl Scouts of the USA in New York, NY. Until her retirement in 1994, Arlene was the Director of USA Girl Scouts Overseas (USAGSO), providing services to American families living and working throughout the world and developing Girl Scouting in the former UN Trust Territory of the Pacific Islands, now the Federated States of Micronesia, the Republic of the Marshall Islands and the Republic of Palau. As Director, USAGSO she traveled to 45 countries and visited all 7 continents while calling New York City her home. After her retirement, Arlene served as a World Association of Girl Guides and Girl Scouts volunteer representative to the United Nations.

Arlene was recognized as a distinguished alumna of Flora Stone Mather College in 1988. She was awarded the prestigious Juliette Low World Friendship Medal in 1996 by the National Board of Girl Scouts of the USA for her commitment to international friendship, global understanding and the worldwide Girl Guide/Girl Scout Movement.

Her interests in domestic and foreign affairs, the arts, theater, ballet, music, opera and genealogy (Lowe, Gardner, and Bartlow lines) continued throughout her life. Friends and family members are grateful recipients of her beautiful cross-stitch masterpieces. While living in NYC, she was a member of the Unitarian Church of All Souls, the first Unitarian Universalist Church in NYC. She served on Case Western Reserve University's Board of Overseers, on the World Association of Girl Guides and Girl Scouts' United Nations Team and filled multiple volunteer positions in a variety of organizations. One of Arlene's long held dreams came true with the establishment of a scholarship, bearing her name, at Case Western Reserve University for Girl Scout Gold Award recipients.

Arlene is the daughter of the late Oscar Bartlow and the late Adda (Gardner) Bartlow, and the sister of the late Carl Bartlow. Her sister, Betty Jean (Bartlow) Wilkins, resides in North Canton, OH. Her nephew, Jim Wilkins, and his family reside in Lexington, KY.

Private interment North Lawn Cemetery, Canton, Ohio. A Celebration of Arlene's Life will be held at a time and date to be announced.


PDF Printable Version
To order memorial trees or send flowers to the family in memory of Arlene Bartlow, please visit our flower store.