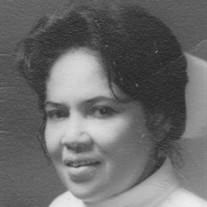 Just two years before the Great Depression of the 1930's, their last born child (of 12 children), arriving to a couple named Hubbert and Lucy Griffin. It was a little girl.

That little girl, Arie ""Pepe La Mocha"" McIntyre (nee Griffin) was born on December 5, 1928 in ""Social Circle"" (Green County) Ga. Arie was the 8th daughter (plus four sons) into the household of Hubbert and Lucy Griffin. To this day, Arie's own (four) children have never had the acquaintance of these grandparents Lucy and Hubbert (Arie's parents) since both parents were taken away from the Griffin children of 12 by early tragedies. Arie, orphaned at age 2, suffered a very early loss - which of course changed all 12 of the children's lives dramatically - to include Arie's life. Arie was raised by her then 25 year old ""Sister Mamie"" along with husband ""Timberlake"". Also being raised in the household were Mamie's daughter Ceola and son Ortez.

""Sister Mamie"" Timberlake became Arie's ""mom"", bringing Arie and another sister Virginia (""Ree"") from Georgia to live in the Washington, DC area. Arie spent all of her early life in Washington, DC where she attended public school (Shaw Jr. High School, Dunbar High School). Following Dunbar High, Arie decided to branch out from the District of Columbia. Despite an offer for an art scholarship at Howard University, Arie's intended next goal was to instead pursue a course of study in Tuskegee, Alabama at the Tuskegee Institute School of Nursing. Nursing was the profession that Arie craved. Barely 16 years old at the time, Arie ventured away from Sister Mamie and the District of Columbia.

In Alabama on a track scholarship, Arie was to meet her future husband Herbert Alvin McIntyre, 2nd Lt. - serving in the Army Air Corps, along with other airmen of the all-black paratrooper 332nd Squadron later to be known as Tuskegee Airmen. The year was 1944.

Herbert, a native Clevelander, and Arie married at the end of WWII. Herbert brought his young bride to a newly-purchased home (1946) in the Mt. Pleasant area of Cleveland where their four children would thereafter soon arrive. Arie was just past her 18th birthday at this point in her life.

During her early motherhood years, Arie often took her young family (four children) to the Cleveland Museum of Art, Karamu House, and the Cleveland Museum of Natural History. Arie and Herbert were both ardent theatre-goers, traveling to New York whenever possible to see Sammy Davis, Jr., Eartha Kitt, and other young black thespians. Arie and Herbert were avid golfers together. Despite a full family life however, Arie's nursing training was not to be left far behind. Four more educational institutions were utilized by Arie as her pursuit of her nursing degrees went unfettered. From Cuyahoga Community College, Arie's associate degree in Nursing was granted (1972). Continuing toward a bachelor degree (Kent State, Ursuline College, 1989) and on to a Master's Degree in Nursing (CWRU, 1991), Arie never failed to instill and convey the same academic pursuits and goals that she insisted upon herself, to her children. Under Arie's guidance, early education for the children was to include parochial school education (St. Cecilia School, Cleveland, Ohio) to instill strong spiritual values as well as a quality education. Despite ""tight"" money on a daily basis with both parents working two jobs apiece, during the 1950's and 1960's, the twin girls cooked, cleaned and shopped for groceries; the boys raced cars and competed in the (Akron) Soap Box Derby with cars they'd build summer after summer with their dad Herbert. ""Those girls ARE going to college!"" was the mantra (of Arie) in the Herbert-Arie household-fondly remembered by her female children.

Arie was an artist, had a deep love of music and the theatre, and conveyed these loves to her children. All four children while in elementary school, picked a musical instrument that they would enjoy. These music lessons each child would pursue during their young years while at St. Cecilia's Elementary School. Arie's interest in people is marked by her many friends in both the nursing profession and all walks of life. Arie regularly tutored CWRU nursing students in her home in Cleveland and traveled many miles with others in her profession to ensure that students in other countries could also obtain their nursing degrees (to include the Universidad de Santo Domingo in the 1980's on several occasions - where perhaps her nickname ""Pepe"" originated). Arie worked hard to keep her family happy, healthy and together, ingratiating herself with the nickname ""Pepe La Mocha"" in an effort to endear her children more as a friend to her, ""versus as a mom"", she would say. Through this gesture, Arie hoped to impress and keep her kids, regardless of age, close to her. Arie's other nickname as a child was ""Ms. Lardie"", about which history, little is known.

Arie passed to her spiritual life on December 9, 2015, leaving her four children, Tyrone Earl, Renee Daphne, Rita Dacia, and Gary Wade; four nephews and nieces, one grandchild, and a wealth of friends and neighbors.

Arie loved to laugh, and always found a way to find humor and lighten others' burdens through laughter.

She endured so much, just to give us a chance.

The family prefers that those who wish may make contributions in her name to the American Cancer Society (Breast Cancer), 11432 Mayfield Road, Cleveland, Ohio 44106-2364 or to the Alzheimer's Association, 23215 Commerce Park Drive, Suite 300, Beachwood, Ohio 44122.

A Funeral Service will be held at 11 AM on Saturday, December 19th at Brown-Forward Funeral Home, 17022 Chagrin Blvd., Shaker Hts., OH 44120, Reverend Daniel Begin officiating. FRIENDS MAY CALL ONE HOUR PRIOR TO THE SERVICE. DATE OF ENTOMBMENT SERVICE HAS BEEN CHANGED TO JANUARY 7th, 2016 at 1 PM, Calvary Catholic Cemetery and Mausoleum, 7101 Verner Avenue, Sacramento, CA 95841. Phone 916-726-1232 for further information.
To order memorial trees or send flowers to the family in memory of Arie McIntyre, please visit our flower store.