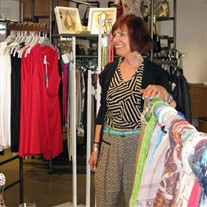 Anne was born in Brussels, Belgium during WWII. Her first memory, as a toddler, is of cheering the U.S. Army as they liberated Brussels. Many other memories will be narrated at her Celebration of Life and Stories to be held on Saturday, January 14th 2017 from 11:00 AM to 1:30 PM at MOCA (Museum of Contemporary Art), 11400 Euclid Avenue, Cleveland, Ohio 44106 and to which all well-wishers are cordially invited.

Meanwhile, here is what Anne wanted to say:
" I was given the gift of life, and now I have to give it back. This is hard.
But I was a lucky woman, who led a lucky existence, and for this, I am grateful.
I first got sick with cancer in June of 2013 - and battled through, with success, for 36 months - then, despite the very best medical treatments available, the cancer recurred this year and was terminal - I decided to be joyful about having had a full life, rather than sad about having to die - accepting what I could not change. At any rate, I am at peace, and on that upbeat note, I take my mortal leave of this world where fashion was, for decades, my daily inspiration and joy - what fun we had, dressing up the most eclectic women in Cleveland - travelling to Europe and the U.S.A in search of the most fashionable collections - what fun it was to vacation, romantically, in the Caribbean's, as well as sailing with my captain, Pierre, in the Mediterranean and the Netherlands, just the 2 of us - what fun it was discovering the best of Paris, Brussels, Amsterdam, New York and Athens - and the memory of my husband's loving care during these last 6 months - he even learned to cook for me (ask about his recipe of "turbot en papillote" - delectable!) ! - so there we are - I may see some of you later, much later, I hope - if not, have a whole bunch of great days"

In lieu of flowers, consider contribution to the Red Cross, www.RedCross.org or Salvation Army, www.SalvationArmy.org - thank you.

A Memorial Service will be held in Spring 2017 - details to be advised in due time.
To order memorial trees or send flowers to the family in memory of Anne Hauwaert, please visit our flower store.