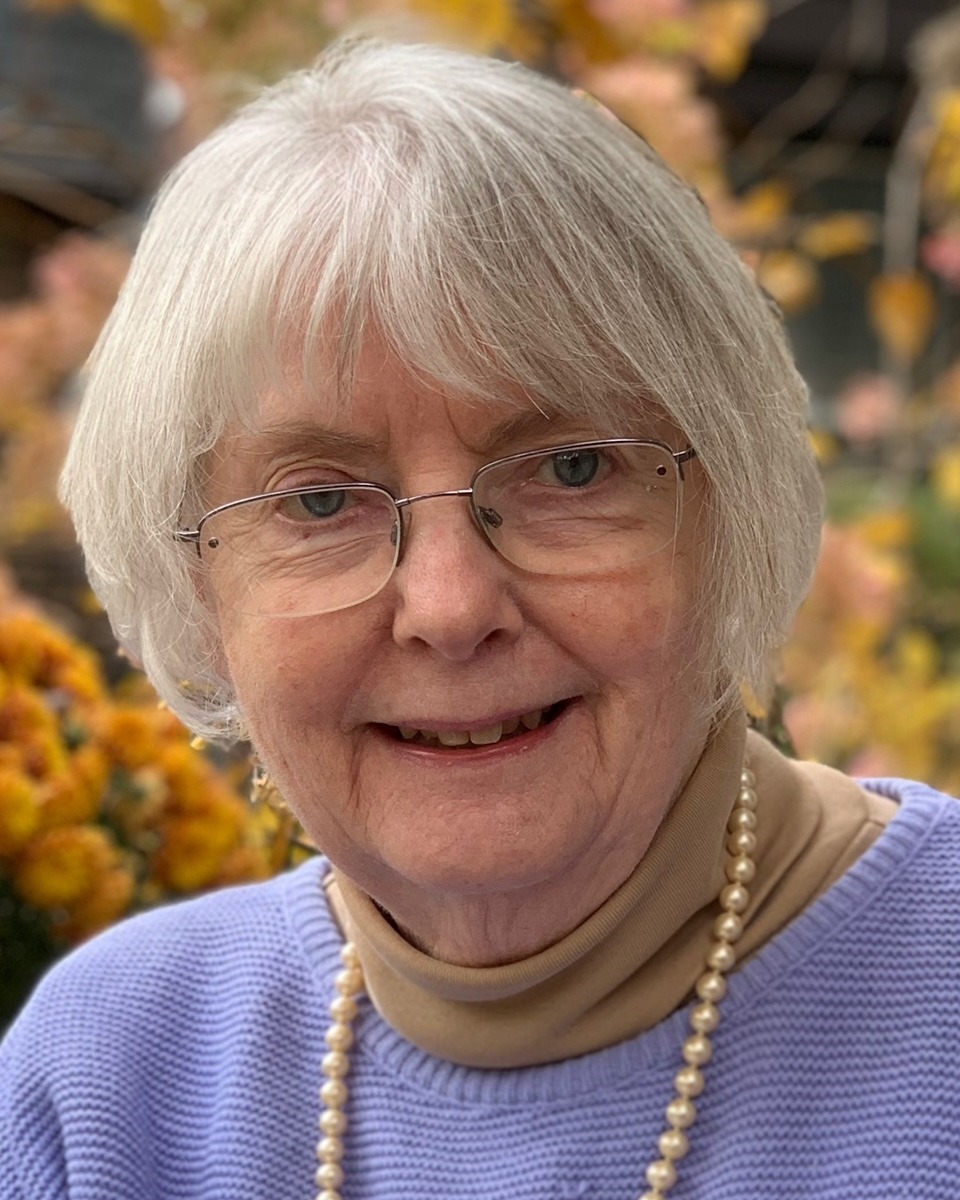 Anna DuVal Smith passed away peacefully in her home due to complications from Alzheimer’s disease on November 5, 2022, surrounded by her loved ones. She was born in Riverdale, MD on November 4, 1944, the eldest child of Jane Carson Foster and William Conley Smith. Anna and siblings Hart and Margaret (Peigi) were raised in a home filled with music, art, poetry, and literature.

Anna credited her deep belief in God to her parents, both of whom had strong religious upbringing. In 1952 the family moved to the Monterey peninsula in central California. In grade school, Anna was an avid Girl Scout and enthusiastic learner. In high school, she was active in clubs, played flute in the marching band, and made the honor roll every semester.

Anna graduated from Monterey Union High School a year early in 1961, having completed her junior and senior years simultaneously. She began her college career as a Psychology major at Flora Stone Mather College for Women, a branch of Western Reserve University in Cleveland, then transferred to Monterey Peninsula College in 1962-3, during which time she was also employed at Coast Counties Glass as an Assistant Manager and Estimator. In spring of 1963, she returned to Western Reserve College where she met her future husband Marvin Schwartz, whom she married in 1966. Though their marriage ended in 1979, they raised their daughter Jennifer in a multicultural collaboration of mutual values including respect, justice, fairness, loving-kindness, community and civic engagement, and passion for the arts.

Anna was a dedicated and loving mother, as evidenced by the volumes of scrapbooks and photo albums she created. She modeled for her daughter how to provide care and love and how to contribute to positive change in society. She taught important life-skills such as cooking, sewing, fire-building, and home-maintenance, and served as Jen’s Girl Scout Troop leader. As a single working mother, Anna provided Jen with a high-achieving, hard working role model.

From 1964-1974, Anna worked as an Editor, Industry Analyst, and Library Manager at Predicasts, Inc, which started as a publisher of economic indexes and surveys and became one of the largest online business information systems in the world. Fascinated with organizational behavior, Anna completed her Bachelor of Arts (Psychology) at Case Western Reserve University (CWRU) in 1977, graduating Cum Laude. She then earned a Master of Business Administration in Industrial Relations from CWRU in 1978, where she was inducted in the Beta Gamma Sigma Honorary Society, and finally her Doctorate in Managerial Studies (combining Industrial Relations & Sociology) from CWRU in 1986. In her application for graduate study, she articulated her goals to “become an effective manager of organizational change. To this end I hope to study human behavior in complex organizations, and how individual and organizational goals might be reconciled.”

From 1986-2016 Dr. Smith served as public sector arbitrator in several Midwest states including Ohio and Iowa, and was a private-practice mediator and labor relations consultant. She helped settle disputes between public sector employees, such as firefighters, prison guards, highway patrol, and police, and the governmental organizations that employed them. She provided annual dues-objector audits for several unions including the Brotherhood of Maintenance of Way Employees and the United Transportation Union. These audits ensured that union dues were spent fairly with respect to dues-objector concerns. Anna was an active member of numerous professional organizations and frequently served these organizations in multiple leadership positions including Chairperson and Vice Chair of the American Arbitration Association Northern Ohio Region Labor Advisory Council, Treasurer of the Labor and Employment Relations Association of Northeast Ohio, Secretary-Treasurer of the National Academy of Arbitrators Region 9, and President and Vice President of the Public Sector Labor Relations Association.

In addition, Dr. Smith served as Chairperson of the National Association of Railroad Referees’ Committee on Professional Responsibility and Chair of their Technology Committee. She especially enjoyed mentoring up-and-coming professionals, writing abundant letters of recommendation and serving as faculty for the AAA Minorities and Women Arbitrator Training Program. Throughout her career, she was a practitioner, advocate, and educator, teaching industrial relations and management at the University of Wisconsin-Parkside, Case Western Reserve University, and Cleveland State University. Like her father who was always on the cutting edge of technology, Anna’s labor relations research ventured into early virtual communities. Her chapter “Problems of conflict management in virtual communities” was published in Smith & Kollock’s(1999) Communities in cyberspace. Anna’s work as a social scientist and practitioner of western dispute resolution techniques helped to reveal social problems and create just and equitable solutions. In her service to the public employees of Ohio she explored all parts of the state and took photographs of almost all 88 centennial barns.

Anna began to scale-back her arbitration practice in 2005 when granddaughter Allison was born in order to spend every Friday in her most rewarding and consequential role as beloved Grandmommie. In addition to the joys of grandparenting, Anna was an avid gardener, gourmet cook, voracious reader, and dedicated patron of the arts, including Cleveland Orchestra, Ohio Light Opera, Great Lakes Theater Festival, and the Cleveland Museum of Art. She was a member of the Cleveland Walking Club, and traveled the US, Europe and Central America with her father Conley, who passed into glory at the age of 98 in 2011. She loved attending gallery exhibits, craft workshops, tea shops, and quilt shows with her daughter who became a Registered, Board Certified Art Therapist and Assistant Professor of Art Therapy at Ursuline College.

In 2019, Anna welcomed Jen and Allison into her home to support her independent living. She was diagnosed with Alzheimer’s Disease in early 2020. With the help of additional caregivers, including Jen’s childhood friend Lisa Clark, Anna navigated her illness with strength and determination. Despite her limitations, and the restrictions of the COVID-19 pandemic, Anna was able to enjoy many more museum visits, concerts, long bird-watching walks in the metroparks, and two summer trips to central California to visit her siblings. Her granddaughter Alli remained a primary source of joy and pride to the end of her life.

The family prefers that those who wish may make contributions in her name to the Alzheimer's Association (www.alz.org) or to First Baptist Church of Bedford (https://www.bedfordfirstbaptistohio.org/), 445 Turney Rd, Bedford Hts., OH 44146, where a Memorial Service will be held on Saturday, December 10 at 11 AM.  Friends may call at Brown-Forward, 17022 Chagrin Blvd, Shaker Hts., OH on Friday, December 9 from 6-8 PM.

Friends may view the service virtually by logging onto this webpage before, during or after the service.