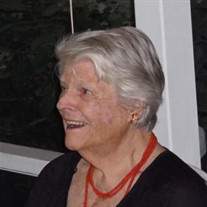 Aloise O'Brien Bates passed peacefully on May 13 with family by her side.

Born Aloise Grasselli O'Brien on August 27, 1931 to parents Aloise Cashman O'Brien and Patrick Charles O'Brien in Cleveland, OH, she lived and loved life to the fullest.

Allie was preceded in death by her husband of 51 years, Walter A. Bates, as well as her brother Patrick C. O'Brien, Jr. of Waite Hill. She is survived by her brother John C. O'Brien (Waterford, ME) and her children Charles C. of Fayston VT, Aloise C. of Seattle, WA (Mark Early), W. Alan, Jr. of Taylor Lake Village, TX (Ann Walton), Thomas O. of Portland, OR, David A. of Shaker Heights, OH (Lisa Downing) and six beautiful grandchildren.

Allie graduated from Laurel School in Shaker Heights in 1949 and maintained a life-long association with the school. She served many years on the Board of Directors of the school as well as being actively involved in several of the fundraising and alumni outreach programs.

After Laurel, she received a BA in Art History from Connecticut College. That, combined with her sales experience at Steuben Glass in NYC, gave her a life-long appreciation for fine art, sculptural glass and silver.

While raising her family, Allie was much involved in the Cleveland community by contributing her talents while serving on the boards of Benjamin Rose Institute, the Diabetes Association, the Intown Club, the Cleveland Botanical Garden and the Recreation League.

Allie was a prolific gardener, taking great pride in her home gardens which she tended for years. She was a member of the Garden Club of Cleveland and was an instrumental figure in the quadrennial White Elephant Sale that helped benefit the Cleveland Botanical Garden.

She was an avid tennis player who later switched to golf when the pace of play began to elude her. She found the greens of the Kirtland Country Club and the Skyline Country Club in Tucson, AZ to be preferable (if no less stressful) to the tennis court.

Allie enjoyed the many travel adventures she and her husband and family experienced over the decades. In addition to extensive travel through the US and Canada, she journeyed through Europe, Africa, the Galapagos, and the Caribbean. She became especially fond of the Malvern Hills area of England, spending several summers there with her dear friend Nicholas Neve.

Allie was a highly accomplished bridge player who relished playing with her various groups in Cleveland, Arizona and Malvern. Allie was less than a quarter point away from achieving her Life Master ranking. She continued playing bridge through her illness and valued the time with her many bridge friends.

In lieu of flowers, the family requests you make a donation to the charity of your choice.

Visitation with the family will be from 5 pm-7 pm on Thursday,June 7 at Brown Forward Funeral Home, 17022 Chagrin Blvd., Shaker Heights 44120.

Funeral Mass will be held at 10:30 am on Friday, June 8 at Gesu Church, 2470 Miramar Blvd., University Heights with private interment at Lake View Cemetery directly after.