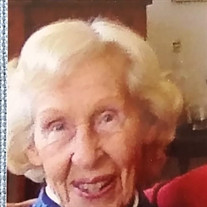 Alice Havemeyer Northrop was born on September 11, 1921, in New York City and grew up in Princeton, NJ. Her mother, Louise Walker Northrop, had studied zoology, and her father, John Howard Northrop, was a biochemist. The family, including her brother, John, spent summers on Cape Cod, where Alice developed her lifelong love of sailing and tennis. She said later that these years were heaven.

She went to Vassar College, where she majored in bacteriology, graduating in 1944. In 1946, her father won the Nobel Prize in chemistry for his work crystallizing enzymes. After college she moved to Boston, where she worked in the laboratory of Dr. John F. Enders at Children's Hospital. There, she met a handsome young doctor who had just returned from military service in Italya�"Fred Robbins.

They married in 1948, six months after they met. Their first daughter, Alice Christine, was born in 1951, and the next year they moved to Cleveland, Ohio, where Fred was hired to be chief of pediatrics at City Hospital and to teach at Western Reserve University Medical School. Two years later he and his colleagues John F. Enders and Thomas H. Weller were awarded a Nobel Prize for the research they had done in Boston, which had led to development of the polio vaccine. Thus Alice became the daughter of one Nobel laureate and the wife of another. In 1957 their second daughter, Louise Enders, was born.

Fred served as dean of CWRU school of medicine from 1966 until 1980, and Alice then had a full-time job as the dean's wife, putting on dinner parties, attending many functions, and managing the household. She developed friendships through sports and gardening, and was an active member of the Kirtland Country Club, the Cleveland Skating Club, the Village Garden Club, and the Vassar Club of Northeast Ohio, as well as two women's lunch groups. She also took care of her mother, who lived with the family for several years until her death in 1975.

After retiring from the deanship, Fred served as president of the Institute of Medicine in Washington, DC, for five years, while Alice was treasurer of the Vassar Club book sale. Alice enjoyed the opportunity to accompany Fred on business trips all over the world. She was especially fascinated by visits to Egypt, Thailand, and Taiwan. When she had free time, she played tennis and golf and sailed in the summers in Maine, where the family spent the month of August every year. Alice was a superb sportswoman and had an adventurous spirit. The stronger the wind and bigger the waves, the happier she was.

She also loved architecture and house design; she was especially proud of the beautiful addition she designed for their house in Maine, as well as a magnificent dollhouse that she created as a miniature version of her beloved house in Cleveland Heights. She delighted in music, and she and Fred had season tickets to the Cleveland Orchestra for many years.

Fred died in 2003, and Alice moved to the South Franklin retirement community in Chagrin Falls in 2009. There, she spent many peaceful hours watching birds at her feeders and reading books about sea and mountain adventures. She was cared for by her long-time devoted household helper Olga Donka and several compassionate home health aides. She died on July 30, 2016, in her home, with her two daughters by her side.

Donations may be made to The Cleveland Orchestra, Philanthropy & Advancement, 11001 Euclid Avenue, Cleveland, OH 44106. Memorial Services will be held Saturday, August 13th at 2 PM in the Chapel of Fairmount Presbyterian Church, 2757 Fairmount Blvd., Cleveland Hts., OH 44118.