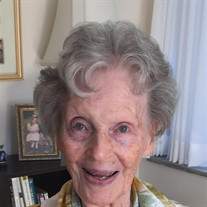 Alice Roberts McKinley, age 93 of Cleveland Heights, OH, passed away peacefully in her sleep with her daughter by her side on October 23, 2017. The dear daughter of Alice Waring Roberts and Louis C. Kuhn, she was preceded in death by her beloved husband Rowland Paull McKinley, JR, daughter Lissa McKinley, brothers Louis and Bowie Kuhn, and son-in-law Richard Levitt. She is survived by her daughter Brent McKinley, brother-in-law Richard McKinley, son-in-law Chip Gilkeson, and grandchildren Jake and Laine Levitt, and Will and Katie Gilkeson.

Using her trademark sharp mind and generous heart, Alice graduated from Western Maryland (now McDaniel) College, with a double major in biology and English, studied marine biology at Smith College, and finished with a degree in Library Sciences from Case Western Reserve University, where both she and her husband worked, Alice in the medical school. After brief tenures in both Watertown, CT and Rochester, NY, the couple settled with their daughters in Cleveland, Ohio, where Rowland took on the job of Headmaster of University School and Alice founded the Lower School library and spent twenty-four years as the cherished Director of Library Services for the school, so much so that the primary library was named in her honor: The Alice McKinley Memorial Library. Clearly, she influenced several generations of boys who owe her much of their love of reading and research. After 25 years, the McKinleys retired to Duxbury, MA, and St. Augustine, FL, and eventually Alice moved to Judson Park, back home in Cleveland, OH.

In lieu of flowers, the family prefers that those who wish may make contributions in her name to The Lissa McKinley Poetry Fund, c/o Laurel School, 1 Lyman Circle, Shaker Heights, OH 44122, or to the Lake View Cemetery Foundation, 12316 Euclid Avenue, Cleveland, OH 44106. A Memorial Service will be held at St. Paul's Episcopal Church on Saturday, December 2nd 2017, at 10am.