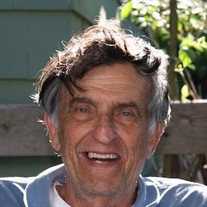 Al was a loving and generous husband, father, stepfather, father-in-law, grandfather, cousin, friend and teacher. Gentle, warm, and kind, always supportive, he was a good listener and good advisor. As a writer and artist he was bursting with ideas, boundlessly creative and productive.

He attended Cleveland Heights High School (class of '50), then Carnegie Tech (Mechanical Engineering, class of '54). Until 1963 he worked for the family business, the World Publishing Company, ultimately managing their book manufacturing plant.

Then emerged the poet, playwright, and teacher, as Al obtained a Master's degree in English Literature from Case Western Reserve University. In 1966, he authored a well-received book of poems, Houses of Ice, and was the co-editor, until 1971, of the poetry journal American Weave. He published a chapbook 50 syllabic sonnets and was proud of being the inventor of that new poetic form. He was the founder and leader of poetry/creative writing workshops for CWRU's Living Room Learning and other continuing education programs in both Cleveland and Naples (FL) and was a source of encouragement for budding writers of all ages. He enjoyed invitations to be visiting poet at local elementary schools.

While in grad school Al discovered another dimension of his creativity: painting. He was a constant experimenter with all sorts of media at both small and very large scale. His volunteering in art therapy at Judson Park led to a long and fruitful artistic collaboration with a much older artist, Ivy Volper, culminating in a 1979 exhibition of their joint paintings, "Confluence." Years later, Judson's art therapist Cathy Bryan, helped Al to re-engage with painting as a continuing source of great joy--even as words failed him.

Al was an avid reader and collector of books. His collecting revealed the wide range of his curiosity and intellect. He became a Civil War buff, an explorer of battlefields and a great admirer of Abraham Lincoln. He was also a particular admirer of Henry David Thoreau and like Thoreau enjoyed nature walks through woodlands and along beaches. Al had eclectic taste in music, from Schumann's symphonies to Leadbelly and Janis Joplin. And he was a lifelong fan of the Cleveland Indians, whose narrow losses (especially in the World Series of 1997 and 2016) were excruciating to him.

Big friendly dogs always made him smile. And with his lively sense of humor, Al helped the rest of us smile, too!

The family prefers that those who wish may make contributions in his name to The Shaker Nature Center, 2600 South Park Blvd., Shaker Hts., OH 44120 or The Judson Foundation, (In support of the Workforce Education Program), 2181 Ambleside Road, Cleveland, OH 44106.

A Casual Gathering will be held Friday, May 18th from 4-6 PM in The Loegler Lounge of Judson Manor.

The following is a tribute from Al's granddaughter, Isabella:

"What do ya say, junior!" Pappy never failed to yell as us kids would race down to the basement to find him sitting at his computer doing work I only ever guessed at. Writing poems, solving a math problem maybe. I never quite knew what Pappy was doing but he was always working hard. He'd put down whatever he was working on with a genuine smile and let us tell him all about our plans to destroy the basement that afternoon. He encouraged my sister and I in whatever we wanted to do whether it was building forts in the basement, writing incoherent stories about dogs that could talk, or attempting abstract painting in the garage.

Part of Pappy's personality is that he brought out the creative in other people. As many of you know he spent much of his time painting, making sculptures, and writing poetry but it was the fact that he wanted to share these things that was inspiring. He was so open, never cared who you were or where you came from, if you wanted to talk about colors or philosophy he was your guy. He also wasn't afraid to ask questions or admit that he didn't know something. Until the end he was constantly learning. He once had even told me that he never got bored; that he didn't understand how other people ever got bored because in his free time he was always thinking. This is a statement that I have thought about a lot since then. To a moody 12-year-old who complained about everything this just didn't make sense. Looking back on that though I see how, for Pappy, this should seem obvious. These things I always thought made him weird are the things I miss the most about him.

I know much of this makes him sound like he was some wise old creative always having intelligent conversations but on the other hand you could never find him far from his fart machine. Maybe it's just part of the male brain but if you ask me the only thing that was so funny about that fart machine is how hard Pappy laughed whenever he used it. Every time without fail that machine's sound sent him rolling. His humor was infectious; he always tried to make other people laugh. Some of his go to's were telling waitresses that he only wanted his pizza cut into 4 slices instead of 8 because he wasn't very hungry or that Hitler keeps his armies up his sleevies. A lot of the time when I was young I didn't understand the joke but he always seemed to get me giggling.

In his final months when I would visit him we often wouldn't really even talk much, just laugh and enjoy each other's presence. His humor about his situation at Judson was something I really admired. My mom would say something such as, "I hope dinner here is good tonight!" "Oh, it won't be." He would reply with a smile, making everyone laugh. Despite these comments he was grateful for everything that he had. Pappy was able to live comfortably through much of his life but never seemed all that concerned with money. He was after experiences, meeting new people, and finding a nice dog to pet much like I am now.

Writing this from China is hard because I cannot be with my family to remember the life of my grandfather. As my mom said before I left though the grandfather that I knew has been gone for a while, appearing only in glimpses during short visits to Judson. I think I'll always remember that last time I saw him the day before I left for study abroad. I hugged him goodbye and said "I love you" as I was walking out the door, to which he didn't respond, prompting Momo to nudge him saying, "Al, did you hear her? She's trying to say she loves you!" "Oh, I know she does." He responded simply with a chuckle making me laugh one last time. I hope you all reflect on the last time he made you all laugh as well, because that is how he would have wanted to be remembered.

To order memorial trees or send flowers to the family in memory of Alfred Cahen, please visit our flower store.