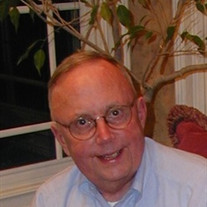 The family requests that donations in his name be made to the Carmelite Sisters at Carmel of the Holy Family, 3176 Fairmount Blvd, Cleveland Heights, OH 44118.

Visitation at 9:30 and Funeral Mass at 10:30 will be held at The Church of the Gesu Tuesday June 21 with the Rite of Committal at the gravesite immediately following.